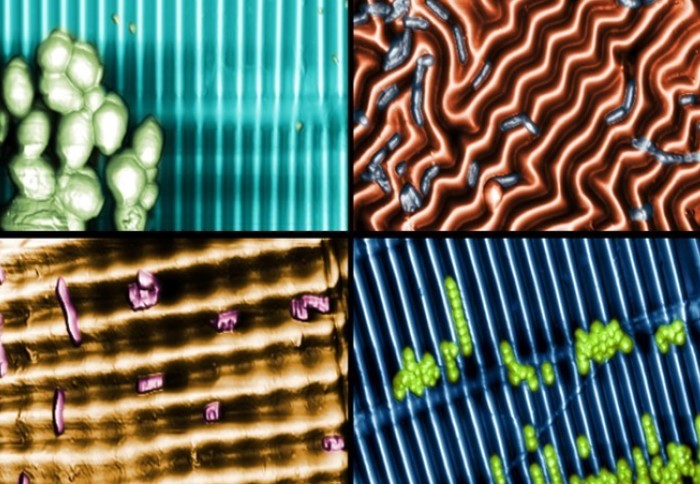 The team from Imperial College London found inspiration in the wavy and spiky surfaces found in insects, including on cicada and dragonfly wings, which ward off bacteria.

It’s inspiring to see in miniscule detail how the wings and skins of animals help them master their environments. Professor Joao Cabral Department of Chemical Engineering

They hope the new materials could be used to create self-disinfecting surfaces and offer an alternative to chemically functionalised surfaces and cleaners, which can promote the growth of antibiotic-resistant bacteria.

The tiny waves, which overlap at defined angles to create spikes and ripples, could also help to reduce drag on marine transport by mimicking shark skin, and to enhance the vibrancy of colour without needing pigment by mimicking insects.

Senior author Professor Joao Cabral, of Imperial’s Department of Chemical Engineering, said: “It’s inspiring to see in miniscule detail how the wings and skins of animals help them master their environments. Animals evolved wavy surfaces to kill bacteria, enhance colour, and reduce drag while moving through water. We’re borrowing these natural tricks for the very same purposes, using a trick reminiscent of a Fourier wave superposition.”

The spiky structure was inspired by the way insects and fish have evolved to interact with their environments. The corrugated ripple effect is seen in the wings of cicadas and dragonflies, whose surfaces are made of tiny spikes which pop bacterial cells to keep the insects clean.

The structure could also be applied to ships to reduce drag and boost efficiency – an application inspired by shark skin, which contains nanoscale horizontal ridges to reduce friction and drag.

Another application is in producing vibrant colours like those seen in the wings of morpho blue butterflies, whose cells are arranged to reflect and bend light into a brilliant blue without using pigment. Known as structural colour, other examples include the blue in peacock feathers, the shells of iridescent beetles, and blue human eyes.

The idea is compelling because it is simple: by mimicking the surface waves found in nature, we can create a palette of patterns with important applications. Dr Luca Pellegrino Department of Chemical Engineering

To conduct the research, which is published in Physical Review Letters, the researchers studied specimens of cicadas and dragonflies from the Natural History Museum, and sedimentary deposits and rock formations documented by Trinity College Dublin.

They discovered that they could recreate these naturally occurring surface waves by stretching and then relaxing thin polymer skins in precise directions at the nanoscale.

While complex patterns can be fabricated by lithography and other methods, for instance in silicon microchip production, these are generally prohibitively expensive to use over large areas. This new technique, on the other hand, is ready to be scaled up relatively inexpensively if confirmed to be effective and robust.

Potential applications include self-disinfecting surfaces in hospitals, schools, public transport, and food manufacturing. They could even help keep medical implants clean, which is important as these can host networks of bacterial matter known as biofilms that are notoriously difficult to kill.

Naturally occurring wave patterns are also seen in the wrinkling of the human brain and fingertips as well as the ripples in sand beds. First author Dr Luca Pellegrino from the Department of Chemical Engineering, said: “The idea is compelling because it is simple: by mimicking the surface waves found in nature, we can create a palette of patterns with important applications. Through this work we can also learn more about the possible origins of these natural forms – a field called morphogenesis.”

The next focus for the team is to test the effectiveness and robustness of the material in real-world settings, like on bus surfaces. The researchers hope it can contribute to solutions to surface cleanliness that are not reliant on chemical cleaners. To this end, they have been awarded a €5.4million EU HORIZON grant with collaborators ranging from geneticists at KU Leuven to a bus manufacturer to develop sustainable and robust antimicrobial surfaces for high traffic contexts.

The work was funded by the EU’s Horizon 2020, Engineering and Physical Sciences Research Council, Procter & Gamble, and the Royal Academy of Engineering.