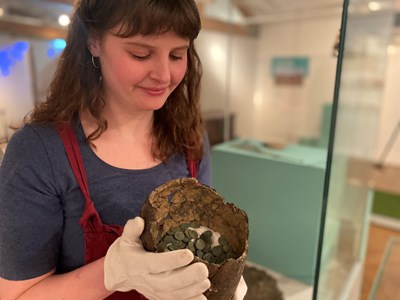 Hoards of ancient coins which were safely stashed beneath the Yorkshire soil centuries ago have been brought together for a new exhibition in Leeds.

The historic coin caches were each thriftily buried underground for safe keeping only to be discovered hundreds of years later, and will illustrate one of the many different ways people have secured their savings throughout human history.

The trio of hoards range from between around 470 and more than 2,000 years old and will be on display at Leeds City Museum as part of Money Talks, a new exhibition opening tomorrow (Feb 11) which explores the evolution of our relationship with money.

They include the Boston Spa Hoard, made up of 172 silver denarii dating from around 119 BC to the reign of the Roman Emperor Hadrian. On loan to Leeds from The Yorkshire Museum, they are thought to have been buried around the second century AD and were discovered during construction work in Boston Spa, having been carefully hidden inside a ceramic jar.

Also on display will be the famous Cridling Stubbs Hoard, a remarkable stockpile of copper coins which may have been concealed by the owner inside a large jar in around AD 346 in a bid to keep the riches inside safe from Saxon and Irish raiders.

The coins include special issues in honour of Rome and Constantinople as well as for Roman Emperors Constantine the Great and the Caesars and were unearthed in Cridling Stubbs in the Womersley parish of North Yorkshire in 1967.

They will be displayed alongside the Temple Newsam Hoard, a pot of 200 silver shillings and sixpences found by coal miners working on the Leeds estate in 1959. They were buried during the English Civil War, most likely to keep them out of the hands of enemy soldiers. Another hoard from the same period was also found at Temple Newsam in 1905.

Kat Baxter, Leeds Museums and Galleries’ curator of archaeology and numismatics, said: “Coin hoards really fire our imaginations because we can speculate about all sorts of exciting reasons and scenarios which led to people burying their accumulated wealth in the ground centuries ago for us to find.

“Although we can never know for sure how or why they came to be buried, the likelihood is that whoever concealed them beneath the soil in the past did so in an attempt to keep their precious money safe.

“It’s a fascinating step in our ever-evolving relationship with money and shows how collecting money and then keeping it secure in whatever way we can has been a common thread throughout thousands of years of human history.”

As well as coin hoards, Money Talks will explore subjects including how money has been used in toys and play, the evolution of banking and different examples of currency used around the world.

This exhibition is sponsored by Leeds Building Society which was founded in 1875 by people working together to save and put home ownership within reach generation after generation.

Councillor Jonathan Pryor, Leeds City Council’s executive member for economy, culture and education, said: “These coin hoards make for an enthralling story and demonstrate the spectacular wealth of history buried beneath our feet in Leeds and Yorkshire.

“It’s inspiring to see an exhibition capture so many facets of our relationship with money and for such a spectacular array of objects from the world class Leeds Museums and Galleries collection to be on display .”

Money Talks opens at Leeds City Museum on February 11 and will be free to enter. For more details, please visit: https://museumsandgalleries.leeds.gov.uk/events/leeds-city-museum/money-talks