A University of Bedfordshire student has set himself a gruelling running challenge in order to raise money for the Bedford branch of Men in Sheds – a charity which provides mental health support for men and encourages them to build skills and friendships.

Having already smashed through his original £700 target – the amount he raised for MIND by running a marathon in 2020 – second-year Sports Therapy & Rehabilitation student Joe Green is well on his way to meeting a new £2,500 target via his Go Fund Me page with this new endeavour.

To complete his fundraiser, Joe will run four miles at 5am on Friday 4th March, followed by another four miles every four hours for 48 hours – bringing his total to 48 miles (over 77km) of running in just two days.

“In a strange way, I’m looking forward to the challenge,” Joe commented. “Although I probably won’t really know what I’m getting myself into until the third or fourth run when the legs start to ache and the fatigue kicks in!” 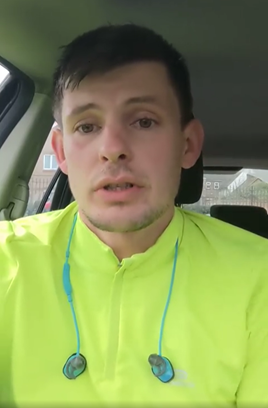 Joe became aware of Men in Sheds – an independently funded mental health charity for men – through meeting one of its members at a Community Exercise Clinic run by the University at its Bedford campus, where Joe was working as part of his course. The charity runs a network of ‘community sheds’, encouraging men to create social connections, build friendships, share skills and knowledge and develop an interconnected mental health support network.

The money will go towards the renovation of an old building the charity has acquired from the council which will include a coffee break room, an IT suite for teaching digital skills and a DIY room are all planned for the new property. Joe has been providing updates (right) about his fundraising via his social media channel.

Joe continued: “It would mean the world to me to hit the target. I’ve been down to the Men in Sheds charity location twice now and I’ve seen the amazing work they are doing there and I’ve also been sent some personal accounts from people who go to Men in Sheds and the positive affect it has had on their lives.

“I’ve always spoken openly about my struggles with my own mental health over the last few years and I’d probably go as far as saying running saved my life; it has always given me a sense of freedom, a distraction and a sense of euphoria – it’s been a massive help. I had originally planned to do the Manchester marathon to raise money for MIND but due to lockdown I just ran it on my own near where I lived.

“I then moved to Bedfordshire, quitting a 10-year career in ICT to enter education again with the University of Bedfordshire. Through my course’s Community Exercise Clinic I was assigned a patient called Fraser who told me all about the Men in Sheds charity. I was always looking for another challenge after my first solo marathon and another opportunity to raise money and I knew straight away that this mental health and social wellbeing charity was the one I wanted to raise money for.”

Fraser Young, Men in Sheds’ Management Committee member who introduced Joe to the charity, added: “On behalf of Bedford’s Men in Sheds community, I’d like to express just how humbled and grateful we are to Joe for his selfless support in helping us raise vital new funds to assist in the repurposing and refurbishment of disused store rooms into a new craft area.

“These new facilities will allow more of our local members to benefit from new creative activities, which in turn help prevent social isolation and foster social support networks amongst members. Joe and his supporters’ generosity is so very much appreciated. Thank you and go Joe!”

Bedfordshire teams up with HSBC to support student entrepreneurs