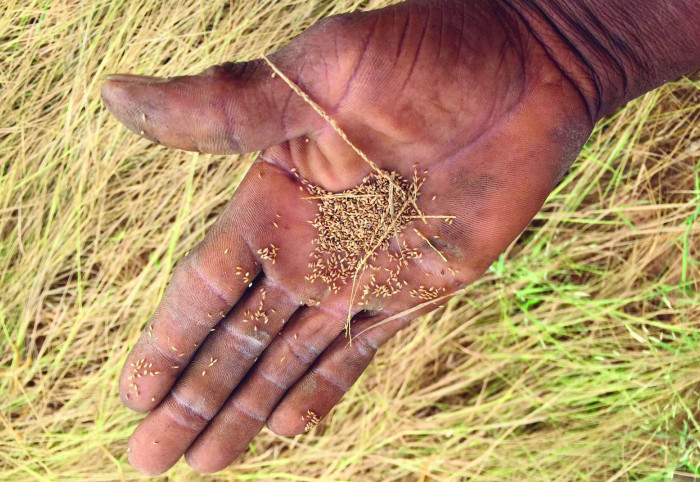 New research has identified more than 1,000 edible plants that could address vitamin B deficiencies for thousands of people.

In a new paper, published today in Nature Plants, scientists from the Royal Botanic Gardens, Kew, Imperial College London, and partners from the UK and the US, reveal the results of a study identifying 1,044 plant species that have potential to be a source of vitamin B.

We need to pay more attention to the incredible diversity of edible plants to better understand how they can contribute to human nutrition. Aoife Cantwell-Jones

Vitamin B in its various forms helps break down and release energy from food and helps maintain a healthy nervous system. It is essential for human health but is commonly deficient in both developed and developing countries.

Their findings show approximately 1,000 plant species were newly identified as potential sources of five different B vitamins: B1, B2, B3, B5 and B9. They also discovered that 63 of the plants are threatened in their natural environment.

The future of food

PhD researcher Aoife Cantwell-Jones, from the Department of Life Sciences at Imperial College London and lead author of the paper, said: “We need to pay more attention to the incredible diversity of edible plants to better understand how they can contribute to human nutrition and what we need to do to preserve them for future generations. Our study represents an important step in that direction.”

A further 358 of the potential source species haven’t had their conservation status assessed, so the number threatened with extinction could be much higher. Many of these vulnerable and nutritionally rich species are found in global hotspots of malnutrition such as South-East Asia and sub-Saharan Africa. These findings highlight the crucial need for further conservation action to ensure that edible plant diversity remains a reservoir of nutrition for future generations.

Dr Samuel Pironon, Researcher in Kew’s Ecosystem Stewardship Team and co-author of the paper, said: “More than two billion people suffer from malnutrition worldwide so improving long-term access to a diversity of wild and cultivated plant sources of micronutrients is key to human subsistence.

“However, very few of the thousands of edible plants found on Earth have had their nutritional contents characterised, which hinders their preservation and sustainable use. This study illustrates how our fundamental knowledge of plant diversity and evolutionary relatedness can provide tools to preserve nature and its contributions to people, including the most essential one: food.”

Sources of vitamin B

The most popular current sources of B vitamins include meats such as livers, kidneys, poultry and seafood, as well as dairy products, eggs, legumes and some fresh fruits. B vitamins may also be supplemented with fortified foods, including breakfast cereals and nutritional yeast.

Some examples of non-threatened plants newly identified as potential B vitamin sources include the Digitaria genus, which is composed of many grass species of high nutritional potential, including fonio and its wild relatives that are native to the savannas of West Africa. These could represent a major food source for the future given they are also fast-growing and highly resistant to hot and dry climates.

Several oat species (Avena sp) found across Europe and the UK may represent important sources of thiamine (B1). The Ethiopian oat (Avena abyssinica) is also a traditional and underutilised food with high potential for food security.

Threatened potential sources of B vitamins include fruits and seeds of several emblematic Baobabs (Adansonia), native to Madagascar. They may be good sources of folate (B9), but are used locally for different purposes, including food but also charcoal and timber, which leads them to be ‘Critically Endangered’. Mining and agriculture are also major threats and some species have only a handful of populations left in the wild.

Secale africanum is a wild rye only found in the Karoo in southwestern South Africa. It used to be common in the area, but it has experienced severe declines from cattle overgrazing, poor land management and diseases. Similarly, Durio kutejensis is a wild species of Durian from Borneo, Indonesia, which is threatened by deforestation and expanding agriculture.

Making the most of new sources

In order to make use of these potential source species, Aoife said: “We should first guarantee they remain available in the wild in the long term, and that we know how to make the best use of them. Both source species and traditional knowledge surrounding them should thus be prioritised for conservation.”

Additionally, she said, these species should have their nutritional profiles checked using chemical methods. “They could then be used alongside other crops to diversify and complement our food systems through conventional breeding, enhancing their domestication, or directly consuming them, provided we don’t over-harvest them in the wild.”

Aoife completed the study as part of the Ecology, Evolution and Conservation MRes program at Imperial’s Silwood Park. She is currently doing PhD research at Imperial as part of the Gill lab group, looking at how the interactions between plants and their associated insect pollinators are being shaped by climate change. Aoife will be travelling to Lapland in May to study the impacts of environmental change on an Arctic plant-bumblebee community.

‘Global plant diversity as a reservoir of micronutrients for humanity‘ by Aoife Cantwell-Jones et al. is published in Nature Plants.

Based on a press release by the Royal Botanic Gardens, Kew.

President Kagame outlines the need for a new approach to migration