Clarence Street in Cheltenham will be closed to cars during Cheltenham Festival to ensure a smoother flow of public transport through the town centre. 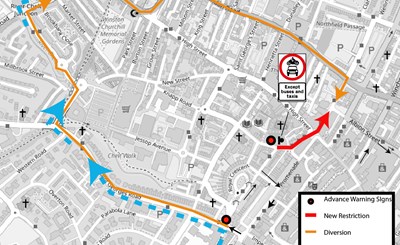 The A46 Clarence Street/North Street, known locally as Boots Corner, will be closed for four days from 9.30am on Tuesday, 15 March, until 8pm on Friday, 18 March.

Taxis and buses will still be allowed to use the road throughout the duration of the Gold Cup Festival.

Stagecoach is expected to move thousands more people each day during race week. Gloucestershire County Council is encouraging people to use public transport as much as possible during the week, and the closure of Clarence Street is in place to support the flow of public transport.

A diversion will be put in place along St George’s Road, Gloucester Road and Swindon Road for motorists.

The road will remain open to pedestrians during the closure.

Cllr Vernon Smith, Cabinet member for Highways and Flooding at Gloucestershire County Council, said: “Every year we work with Cheltenham Racecourse and the borough council to manage traffic in the town during the Gold Cup Festival.

“We strongly encourage race goers to use public transport if they can, as this helps with traffic volumes and allows businesses and residents go about their daily lives.”

Time running out to apply for your secondary school place!