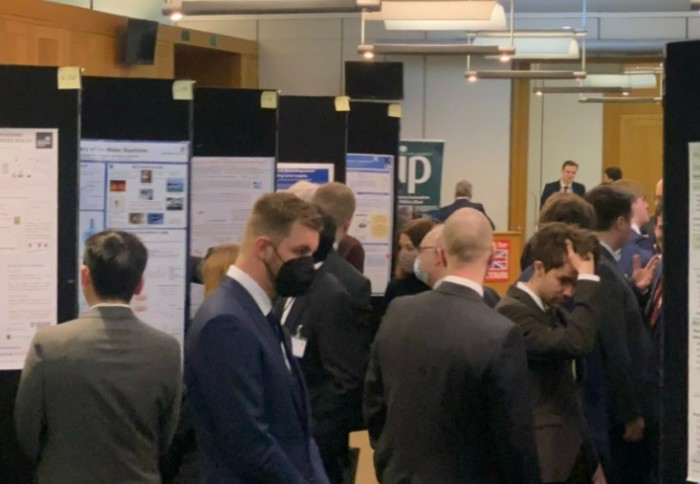 Nine Imperial researchers presented their research to parliamentarians and judges at the STEM for Britain poster competition in Westminster.

The event, which has been held in Parliament since 1997 and is organised by the Parliamentary and Scientific Committee, is designed to promote greater awareness among parliamentarians of the impact and potential of science, technology, engineering and mathematics (STEM).

With nine researchers in the final, Imperial College London was one of the largest contingents in the competition. The event consisted of groups of researchers divided into five categories (biological and biomedical sciences, chemistry, engineering, mathematical sciences and physics) presenting their posters to parliamentarians and expert judges.

The winner in each competition was judged to be the best in communicating their research to a lay audience. Among the judges was Imperial Vice–Provost for Research and Enterprise, Professor Mary Ryan, who was serving her final year as the Chair of the judging panel for the engineering prize.

Giving young researchers the chance to showcase the strength and wider significance of their research to national policymakers is vitally important to build the links and collaboration between science and policymakers we need. Professor Mary Ryan Vice–Provost for Research and Enterprise

Professor Ryan said: “It is fantastic to see so many early career researchers presenting directly to Parliamentarians. Giving young researchers the chance to showcase the strength and wider significance of their research to national policymakers is vitally important to build the links and collaboration between science and policymakers we need.”

She added, “I am also particularly proud to see Imperial’s research community so well represented in the finals of this prestigious competition.”

The competition itself was divided into two sessions, with opening remarks from Stephen Metcalfe MP, the Chair of the Parliamentary and Scientific Committee who said it was great to see “so many wonderful posters.”

Francesco Puccioni, a Research Postgraduate from the Department of Mathematics, presented his poster on the life and death of agent-based populations, which could help increase the efficiency of drug treatments within the mathematics category. Francesco said that events like STEM for Britain help make “science a part of society and underlines how scientists, engineers and policymakers are all working together to help achieve progress.” For Francesco, the event underlined how researchers “must learn how to communicate our results to other researchers and the general public.”

I would encourage anyone at Imperial – or anywhere, for that matter – to apply… for the opportunity to witness the quality and the sheer diversity of research ongoing in the UK. Dr James O’Keeffe Department of Electrical and Electronic Engineering

The next STEM for Britain competition will take place in early 2023 with applications likely to open from September 2022. You can find out more about the event on the STEM for Britain website.

The list of Imperial researchers at this year’s event is below:

Jenna Lawson – Listening In On The Forest: The Use Of Bioacoustics To Preserve Rare And Threatened Species