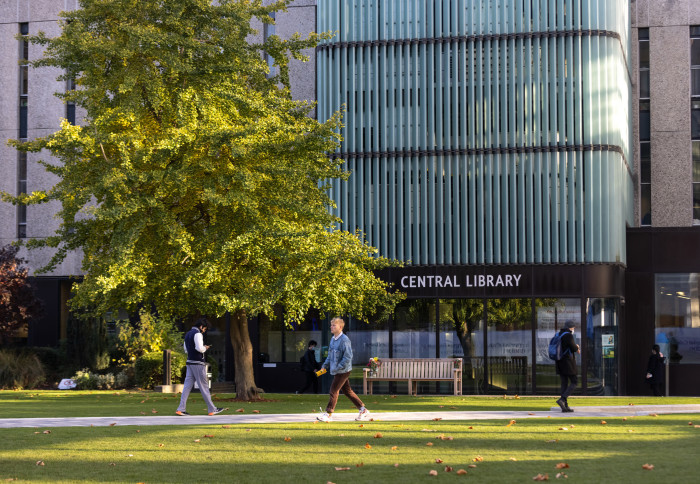 A new scholarship fund, currently totalling close to £250,000, will support students from displaced communities such as asylum seekers and refugees.

The donor-backed Sanctuary Scholarship Fund will provide scholarships at both undergraduate and master’s level. Imperial is matching donations received for the fund, aiming to award the first scholarships as early as the 2022/23 academic year. The fund currently stands at close to £250,000 of donations and Imperial funding.

The conflict in Ukraine is only the most recent tragic reminder of why offering sanctuary to scholars in need matters. Professor Alice Gast President, Imperial College London

The announcement comes as Imperial’s President and Provost condemned the Russian Federation’s “unjustified and inhumane” invasion of Ukraine. The resultant refugee crisis has accelerated Imperial’s efforts to support displaced students and academics, which forms part of the College’s wider work to create new scholarship opportunities for students from backgrounds that are underrepresented in the College’s community or who face financial barriers to study.

Members of Imperial’s governing Council and senior staff are among the first to pledge support for the Sanctuary Fund.

Mary Meaney, who sits on Imperial’s governing Council and on Imperial College Business School’s Advisory Board, has made a significant personal donation to the fund, while also providing shelter for scores of displaced people at her home in France, following the invasion of Ukraine.

Mary Meany said: “I’ve seen first-hand the urgent need to support displaced people from Ukraine along with those fleeing war, persecution and danger around the world. Providing opportunities for talented people who have been forced to flee their own country is one thing we can do to help, and I urge others to lend their support.”

John Allan, Chair of Council – who has also made a significant contribution to the fund – said: “I am enouraged to see the Imperial Community coming together to support displaced students and academics during these traumatic times and encourage all alumni and friends to join us”

In the UK, university applicants with asylum-seeker status are legally classed as overseas applicants – meaning higher tuition fees – and do not have access to student financial support through the Student Loan Company (SLC). This presents significant financial barriers to higher education. While refugees count as home students and can access SLC support, many face challenging circumstances, including financial difficulties.

The College will also widen support for PhD students and academics who have been displaced from their home country due to war, political unrest or environmental crisis.

Imperial is already an active participant in the Council for At-Risk Academics (Cara) Fellowship Programme, which helps academics who are at risk of imprisonment, injury or death to find temporary refuge in UK universities and research institutions.

This not only ensures their safety, but enables important research to flourish, new collaborations to form, and knowledge and skills to be shared across borders.

Imperial hosts Cara Fellows and their families while they complete PhD or postdoctoral placements at the College, providing bursaries and other financial and practical support to fellows and their dependents.

A new donor-backed Sanctuary Fellowship Fund, also enhanced by Imperial funding, will boost this support and increase the number of placements the College can offer across all faculties.

One Cara fellow who is presently a research associate at Imperial College London said: “Words cannot describe how Cara helped me to chase my dream to complete my Ph.D. at The London School of Hygiene & Tropical Medicine (awarded in 2020) and makes the impossible possible. Cara’s team continued to offer support and sponsor me. Cara helped me to secure my placement at Imperial College London as a research associate since 2020, where I am also welcomed and have great support. That helped me in adding valuable contributions to the scientific community in the UK.”

Stephen Wordsworth, Executive Director of Cara, said: In recent years most of the academics looking to us for help to escape from danger have been from the Middle East and parts of Asia, including most recently Myanmar; and there has been no let-up in the appeals we are still receiving from these countries.  Since the Taliban take-over last August, however, we have received over 700 applications from Afghan academics and, most recently, Putin’s assault on Ukraine has prompted applications from a growing number of Ukrainian academics, and also from Russians who are appalled at what is being done in their name.  We are doing everything we can to help them all, and are grateful for the many offers of additional support we have received from our university partners, including Imperial.”

Professor Alice Gast, President of Imperial College London, said: “Imperial has a long history of providing sanctuary for students and academics fleeing war and persecution. Indeed, some of our greatest achievements come from refugees like Dennis Gabor. We have a responsibility to ensure that the life-changing opportunities offered by a university education or academic career remain within reach of people displaced from their home countries. The conflict in Ukraine is only the most recent tragic reminder of why offering sanctuary to scholars in need matters. These funds will provide crucial, flexible support where it is most needed, as we continue to welcome students and academics from every part of the world.”

Find out more and donate to the fund

Q&A: Overfed and undernourished – the global issue of obesity and malnutrition | Imperial News