4th Battalion, The Parachute Regiment to take to the streets of Leeds 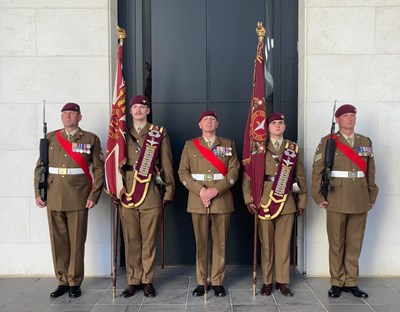 The public are invited to show their support for The 4th Battalion, The Parachute Regiment (4PARA) as they march through the streets of Leeds this weekend (26 March) to exercise their right to the freedom of the city.

Saturday will bring together 4PARA, past, present and future as they take part in a freedom parade on Millennium Square. The battalion will be joined by cadets and veterans of 4PARA and will also be accompanied by the British Army Band Catterick as they march through the city centre.

4PARA a reserve battalion established in 1942, are the first military service unit to be bestowed with the Honorary Freedom of Leeds since HMS Ark Royal received the honour nearly 50 years ago in 1973.

The troops will march onto Millennium Square at 11.30am and will receive a civic welcome from the Lord Mayor Councillor Asghar Khan. Following this there will be an inspection of the parade by the Lord-Lieutenant of West Yorkshire, Mr Ed Anderson CBE DL, the Lord Mayor and the Leeds Children’s Mayor Zulayka Hussain.

4PARA will then exercise their freedom of the city by marching through the city, parading along The Headrow and passing through Briggate and along Cookridge Street before returning to the Millennium Square where the Lord Mayor and Lord-Lieutenant will take the salute at approximately 12.30pm.

The Lord Mayor of Leeds, Councillor Asghar Khan, said: “As a city we are extremely proud of our military personnel, with the city coming together for the annual Armed Forces Day celebrations and Remembrance Sunday commemorations.

“4PARA are an integral part of the council’s work to honour the armed forces so I am delighted to welcome the battalion to exercise their freedom of the city. I would encourage as many people as possible to come down and support the parade and enjoy the spectacle.”

Lieutenant Colonel Rick Lewin, Commanding Officer 4 PARA, said: “The battalion has a long history and deep-rooted ties with the City of Leeds and its community, therefore it is a great honour that I will be able to present the 4th Battalion, The Parachute Regiment on parade this Saturday to exercise the freedom of the city.”

Road Closures: There will be a number of road closures in place during the parade across the city centre, however pedestrian access will be maintained at all times.