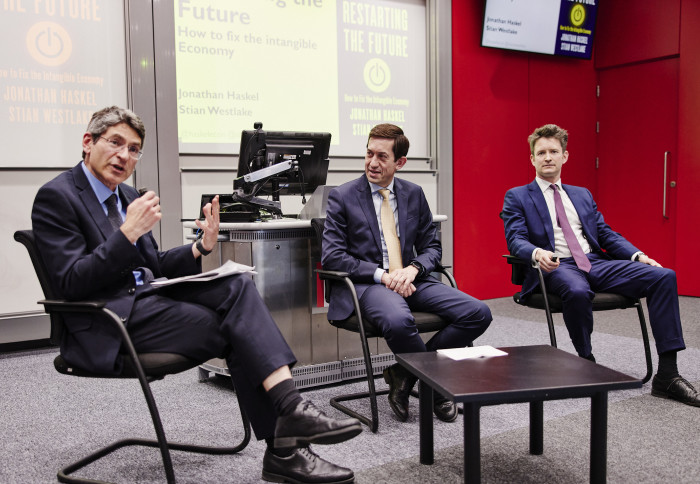 The importance of intangible assets such as software is rising, but financial institutions have failed to account for this.

This is according to Jonathan Haskel, Professor of Economics at Imperial College Business School, speaking at the launch of his new book, ‘Restarting the Future: How to Fix the Intangible Economy‘. He was joined by his co-author Stian Westlake, Executive Director of Research at innovation foundation Nesta.

The authors argue that the economies of places such as the UK, US and Europe are suffering from a series of issues – including stagnation, inequality, dysfunctional competition and fragility – as part of what they describe as the “Great Economic Disappointment” of the 21st century. The book looks at the reasons behind slowing economic growth in wealthy countries since the early 2000’s, the impact this has had, and their proposed solutions.

The reasons usually put forward for the ongoing economic disappointment in the developed world fall into two categories, explained Professor Haskel in a presentation of the book’s key findings. These are “conduct theories”, which argue society has lost its way either because of too much neoliberalism or not enough, and “circumstance theories”, arguing that our current situation is the inevitable consequence of society becoming wealthier.

However, the authors believe the problem we are seeing is the result of being caught between the past and future, with Professor Haskel pointing to “outdated institutions that don’t serve us well” as the reason the transition to an intangible economy has slowed.

In addition to the economic impact of this failure, the authors argue the results are also being felt culturally and socially.

The authors explored which areas of society need to be fixed to solve the problem, arguing that there needs to be public investment in research and knowledge, cities and planning, and competition policy. They believe financial architecture is also in need of repair, pointing to the “curse of collateral” in bank financing. Unlike tangible assets, such as houses, intangible assets cannot be used as collateral, meaning businesses based on intangibles often struggle to secure funding.

Professor Haskel and Mr Westlake argue the solutions to these issues include the government ending the tax bias towards debt, and reforming regulation around pension schemes and insurers to encourage risk capital. The pair noted that fixing the intangible economy would be a great challenge but essential to achieving growth and prosperity.

This new book follows on from the themes explored in the authors’ previous work, published in 2017, ‘Capitalism without Capital: The Rise of the Intangible Economy‘, which explains the shift to the intangible economy and the challenges associated with accounting for non-physical assets.

‘Capitalism without Capital’, which received widespread praise, has been recommended by Bill Gates and was named one of the best books of 2017 by both The Economist and the Financial Times. The research behind it was also the basis of Professor Haskel’s winning submission to the inaugural Indigo Prize for economics: his team was awarded a share of the £125,000 grand prize for their essay examining how intangible assets could be better measured by GDP.

COVID-19 – how long am I infectious and when can I safely leave isolation? | Imperial News