James Coppinger presented with Freedom of the Borough

Doncaster Rovers longest-serving player James Coppinger was presented with a Freedom of the Borough Award on Tuesday (22nd March) at a ceremony at the Eco-Power Stadium. 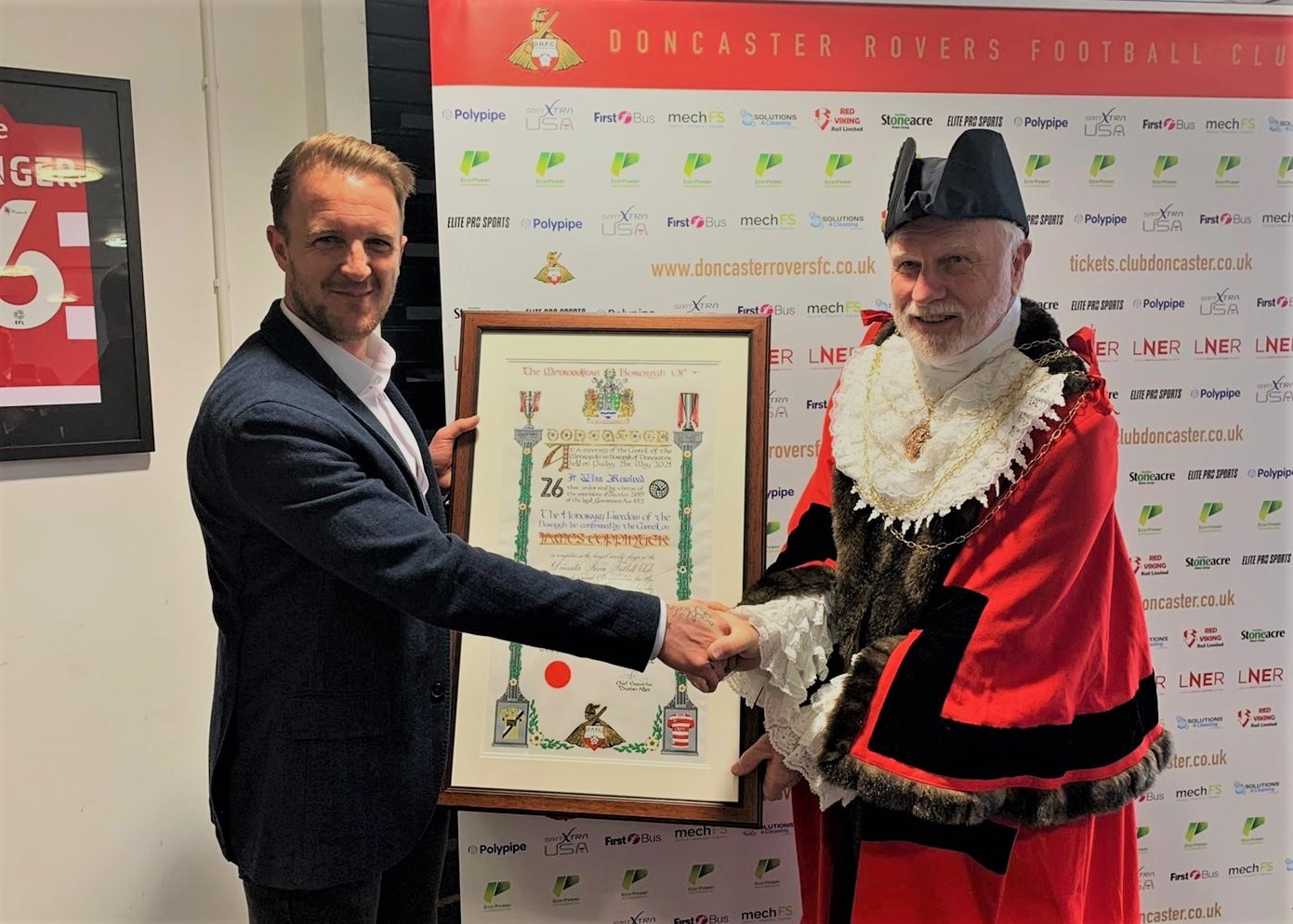 The accolade is the highest honour that a local resident can receive and recognises their achievements and support in the Doncaster community.

James signed for Doncaster Rovers in 2004 and was the longest-serving player in the club’s history and played beyond his 40th birthday.  He was an integral part of Doncaster Rovers squads that won promotion from League One twice, League Two once and the Johnstone’s Paint Trophy.

Off the pitch, James has been a regular at community events and joined other club staff and fans in hiking the Inca Trail in Peru in 2011, which raised over £50,000 for Save The Children and the NSPCC.

James has been a powerful advocate in recent years about mental health and set up a business helping young footballers improve their mental approach to the game.  He has been heavily involved in the club’s activities around mental health and designed the recent charity shirt which was sponsored by Campaign Against Living Miserably charity.

In addition, in his role as a footballer for Doncaster Rovers and in his own personal activities, James has been an ambassador for the suicide prevention charity CALM.

James Coppinger said: “I feel immensely proud to receive such an honour. To be part of such a special time in the club’s history was amazing for me and my family, with my wife spending time working at DRI and both my sons born here, Doncaster will always hold a special place in my heart. We were always made to feel so welcome, which played a huge part in me staying for so long.”

Ros Jones, Mayor of Doncaster, said: “James is a true Doncaster legend and hero, with over 800 career appearances – over 695 of these with Doncaster Rovers! He has been a role model for the young people of Doncaster for over 17 years and it is an honour to be here to see him receive the Honorary Freedom of Doncaster, as a token of our thanks and appreciation.”

Mayor Jones added: “James, you played in the top five tiers of English Football and back in 2004 you chose Doncaster as your place to settle and Doncaster chose you!”

The Civic Mayor of Doncaster, Councillor Richard Allen Jones said: “It is a privilege to be part of the ceremony to honour James with the Freedom of the Borough.

“This is well deserved recognition for James and his achievements throughout his football career as well as his dedication over the years through his charity work to helping to improve the lives of others.”

The Freedom of the Borough is an honorary title and authorities are able to bestow it on individuals who have provided exceptional service to their town or enhanced its reputation through their actions.

Find out more about apprenticeships at presentation event on Wednesday