The oldest surviving complete text in the Cornish language and a manuscript from Cornwall a thousand years ago have gone on display at Kresen Kernow.

Running until 22 February 2022, The Bodmin Gospels and Pascon Agan Arluth (The Passion of our Lord) will feature in a display in Kresen Kernow’s Treasures Gallery.

The manuscripts have been loaned to Kresen Kernow through the British Library’s Treasures on Tour programme, generously supported by the Helen Hamlyn Trust.

Over 1,000 years old, The Bodmin Gospels is the earliest book known to have been in Cornwall. It was written in Brittany but was in Cornwall by the 940s. In the 10th and 11th centuries, documents (known as manumissions) recording the freeing of enslaved people before the high altar of the church were copied into the gospel-book. As a result, the book is considered to be an important source for early medieval Cornish history and the history of slavery in Anglo-Saxon Britain. 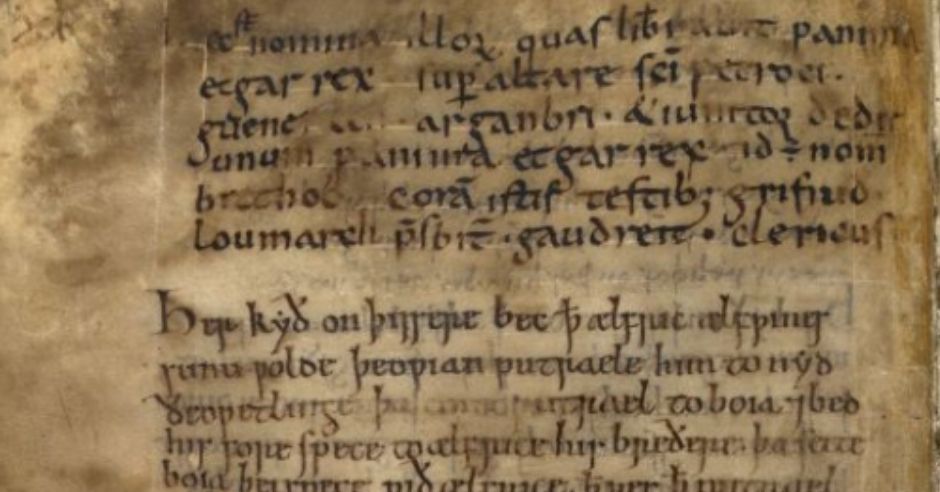 Image from the Bodmin Gospels © British Library Board

Pascon Agan Arluth is thought to be the oldest surviving complete text in the Cornish language. Preserved in a manuscript dating from the 1400s, it tells the story of the Passion of Christ, including events such as the Last Supper and the Crucifixion, in 259 stanzas. It is the only medieval Cornish manuscript to feature illustrations.

The manuscripts on loan will be complemented by treasures from Kresen Kernow’s archives in the display, including the cartulary for Glasney College, and a beautifully illustrated medieval calendar. The exhibition will be accompanied by a programme of activities, including fun family workshops and online talks.

Booking is recommended to see the manuscripts

Stephen Rushworth, Cornwall Council cabinet portfolio holder for economy, said: “As the popular Out of the Ordinary exhibition has now come to an end, Kresen Kernow has followed it up with another dive into early Cornish history by bringing more manuscripts home to Cornwall. This new exhibition will give a glimpse into medieval Cornish life and language and I encourage anyone with an interest in medieval or Cornish history to pay a visit.”

Conrad Bodman, Head of Culture Programmes at the British Library, said: “We are thrilled to be loaning The Bodmin Gospels and Pascon agan Arluth to Kresen Kernow. The records added to the gospel-book offer an insight into daily life in early medieval Cornwall and the poem is the oldest complete literary work in the Cornish language.

“The Library’s collections are for everyone and we hope these manuscripts, which are going on display alongside highlights from Kresen Kernow’s archives, will inspire new audiences, young and old. This loan is part of our Treasures on Tour programme, which is generously supported by the Helen Hamlyn Trust and enables us to open up the Library’s collections to better serve our communities across the UK.”

Kresen Kernow is Cornwall’s archive centre, home to 1.5 million documents dating back 850 years. Situated on the former brewery site in Redruth, everyone is welcome to visit and explore the collections.

Enchanted “Garden of Freedom” has opened at Royal Cornwall Hospital

More Together for families new stories