Parent’s welcome special gift for babies cared for in the county’s neonatal units. Mother to Leo, a 15-day-old baby in Lincoln neonatal unit said: “Everyone on the unit has been so lovely and I have been able to stay on site to be close to Leo. The nurses have taught me everything about caring for Leo in his cot and have generally just so helpful.

“The bear is such a lovely token that will go in Leo’s memory box and will be something to show him when he is older.”

The neonatal units at Lincoln County Hospital and Pilgrim Hospital Boston, have started giving out keepsake bears to parents whose babies spend time on the unit.

The bears have been funded by United Lincolnshire Hospitals Charity and were produced by a local small business. The bear is wearing a t-shirt with a yellow graphic in tribute to the baby being a Lincolnshire yellowbelly.

The idea originated following a discuss with a parent on the ward and the idea of mementos for the baby’s stay on the unit.

Carole Chapman, Ward Manager at Pilgrim Neonatal Unit said: “Since the introduction of the bears we have had really good feedback from the parents, they love the idea of the bear that they can take away and keep as a reminder of their stay with us. It adds a personal touch to what is a very stressful time. A little piece of normality at a very abnormal time.

“I am really happy the charity was able to support us in the purchase of the bears. It means a great deal to be able to give this small token to our families in what can be a very stressful time.”

Ben Petts, Charity Manager said: “The United Lincolnshire Hospitals Charity were really keen to support this venture, a way we can impact the experience of patients at their earliest point.” 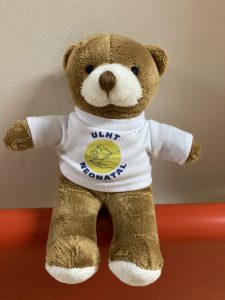 Our neonatal units provide 24-hour care for premature or sick babies. The unit is divided into three areas; intensive care (ICU), high dependency (HD) and special care (SC). You can find out more about our neonatal services on our website.

Hospital restaurants reopen to the public