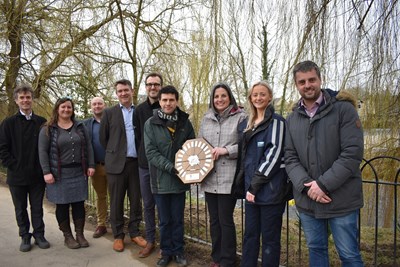 Days after passing its first test at the hands of Storms Dudley, Eunice and Franklin, there was more good news for the Otley Flood Alleviation Scheme (Otley FAS). Recently, the scheme won the prestigious Smeaton award at the Institution of Civil Engineers (ICE) Yorkshire and Humber awards ceremony in Leeds. The awards celebrate the achievements of civil engineering in the Yorkshire and Humber region, with the Smeaton award being the top prize for projects with a budget under £5million. The judges praised the environmentally friendly approach to flood alleviation, how the scheme enhances biodiversity through the daylighting of Kell Beck, and praised the scheme for completing the works successfully so close to Otley Bridge, a scheduled ancient monument.

Works to alleviate flooding in Otley began in 2016, in response to the devastating flooding from storm Eva on Boxing Day 2015. In March 2020, the plans for a £4.5million scheme were approved by Leeds City Council. Construction began in March 2021, and the scheme was functional in November 2021.

In March 2022, Councillor Helen Hayden, Leeds City Council’s executive member for infrastructure and climate, joined a group of stakeholders on the Otley Flood Alleviation Scheme (Otley FAS) to tour the site of the completed works, and to observe the condition of the scheme in the aftermath of its success across storms Dudley, Eunice and Franklin.

Across 6 days in February 2022, the three back-to-back storms brought more rainfall than the entire average for the month of February. This resulted in levels on the River Wharfe reaching 1.92metres on Sunday February 20, similar to those from Storm Ciara in February 2020, when flooding was experienced at Billams Hill.

The high river levels provided the first test of the newly finished Otley FAS. As predicted, the scheme was effective. It successfully stopped the floodwater from escaping into the road at Billams Hill, allowing the road to remain open. There was also no flooding to the properties on Farnley Lane or Bridge Avenue.

“We are thrilled that the Otley Flood Alleviation Scheme has won the Smeaton Award.

It has already been proven that this scheme helps protects the homes and community here in Otley, as well as keeping the road open which is so important for access to Wharfedale hospital and to keep this town moving. Residents have been in touch to tell us about the weekend of Storms Dudley, Eunice and Franklin, and the huge sense of relief they felt when the water did not enter their homes, as it did on Boxing Day 2015.

“The scheme also offers benefits in terms of biodiversity, wildflowers will be planted alongside the 240+ trees that have already been planted in the area. This will be brilliant for local wildlife, for carbon capture, and their beauty can be enjoyed by residents too as they walk through what was previously a brownfield site.

“Winning this award is truly the icing on the cake, as it further strengthens our resolve to increase our resilience to the climate emergency through engineering projects that are balanced with environmental benefits and increased carbon sequestration.

I’d like to thank all of the local residents who consulted with us, as well as all of our partners who contributed to make this award-winning scheme a reality.”

“I’m absolutely delighted to see this project recognised, not only through industry accolades such as the Smeaton Award, but more importantly by local people who have had the defences to their homes and essential infrastructure robustly tested already by the quick succession of Storms Dudley, Eunice and Franklin. To hear accounts from the people of Otley who have sustained no loss or damage to their property and maintained uninterrupted access across the river to the hospital and town centre is truly gratifying. Delivering this kind of work whilst working in close proximity to homes and businesses is only possible through partnership working, an ethos our teams continue to apply as we continue our programme of work to improve flood resilience across the Leeds City Region.”

“We’ve worked with the community throughout this project to get the right flood defence scheme for the town, and this award not only recognises that but also celebrates the enhancements it has made to the local environment. This scheme has also recently been put to the test, successfully protecting homes and businesses, bringing some reassurance to people who have sadly been flooded in the past.

“However, we can’t prevent all flooding, so it’s also important that people check their flood risk, develop a flood plan and sign up to flood warnings.”