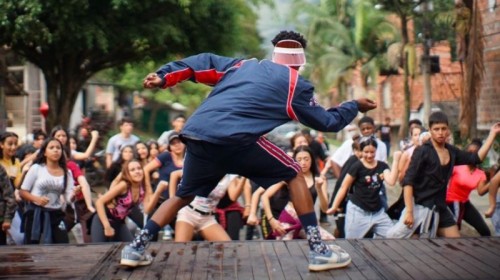 A charity that supports individuals or communities affected by war, violence or oppression which began as a research project at The University of Manchester has won a major award.

In Place of War has been named as the recipient of the Award for Civic Arts Organisations 2022 by the UK branch of the Calouste Gulbenkian Foundation, in partnership with King’s College London, and will receive a £25,000 prize.

It was one of three winners chosen from over 200 high-quality applications from across the UK for their outstanding capacity to adapt to the pandemic, and for how they have deepened their commitment to their communities over the past two years.

In Place of War is a global organisation which started life in 2004 as a research project on the relationship between performance and war based at The University of Manchester. Now an independent charity, it enables change-makers to work in conflict zones across the world by using creativity – especially music – and cultural entrepreneurship as tools for change. The organisation aims to transform a culture of violence and suffering into hope, opportunity and freedom by providing a voice for marginalised communities.

During the pandemic they worked with 11 grassroots community organisations on 100 Agents of Change, which was their first major UK-based programme and was funded by the Arts & Humanities Research Council (AHRC). Overseen by The University of Manchester’s Professor James Thompson, it involved refugees, asylum seekers, people living in poverty and LGBTQI+ communities, and resulted in 100 young people connecting with artists and activists from around the world to share their experiences, skills, and knowledge.

The organisation is now fundraising for a new and extended three-year model of the programme, and the prize money from this award will help to kickstart these efforts.