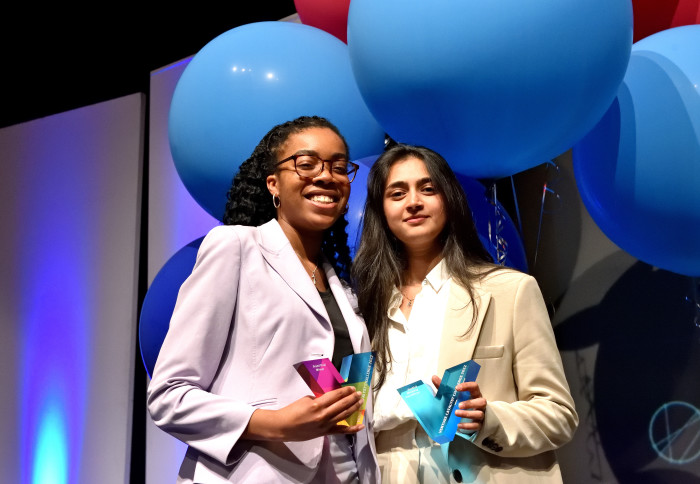 DotPlot, founded by Imperial College London students Shefali Bohra, Debra Babalola, Himari Tamamura and Yukun Ge, won the Venture Catalyst Challenge 2022 for developing a device to monitor changes in breast health. The team are all students on the Innovation Design Engineering Master’s course, run jointly by Imperial and the Royal College of Art.

The Venture Catalyst Challenge (VCC) is the College’s largest entrepreneurial competition for students and alumni, enabling them to develop an innovative idea for commercialisation. The team took home the £30,000 top prize after battling it out against four other startups during the competition’s digital final.

After seven intensive weeks of masterclasses, coaching, and meetings with experts, 25 teams, divided into 5 themed tracks, pitched to expert panels at the competition’s heats. The winner of each track was awarded £10,000 and then competed to win the £20,000 Grand Prize.

Ben Mumby-Croft, Director, Imperial Enterprise Lab said: “This was our first in-person Grand Final event since 2019 and this year’s teams did not disappoint.

“From protecting privacy in the age of smart devices, to a plant-based alternative to meat with the same texture and flavour; biodegradable plastic made from seaweed to reducing food waste through AI and an innovative at-home breast monitoring device, the quality of this year’s teams was exceptional and testament to Imperial’s diverse and vibrant entrepreneurial eco-system.”

1 in 7 UK women will be diagnosed with breast cancer in their lifetime and on average around 30 women a day die from breast cancer in the UK. The DotPlot team aim to reduce this by helping women detect changes to their breast tissue at an early stage.

Their portable, handheld device uses patent-pending technology to build a map of the user’s chest and take detect changes in their breast tissue. The tool is programmed to identify different areas around the breast to map the reading to specific points – meaning any changes in tissue density can be easily detected. When used over several months, the tool can provide month-by-month comparisons of breast tissue compositions which helps to flag abnormalities as early as possible.

The device is linked to a specially designed app, where users can follow a step-by-step guide on how to check each area of their breasts. The app provides real-time feedback and generates a report at the end of each check, which can be compared to information gathered in previous months.

The team’s goal is to alleviate the confusion and misconceptions surrounding breast self-checks, and ultimately help more women detect potential breast cancer earlier. The team told Dezeen: “We aim to make breast health care routine and demonstrate that discovering changes in your breast tissue is not something to be feared – especially when detected in good time.”

The team hope to use their winnings from the VCC to run an efficacy trial of the device in a breast cancer clinic.

The competition was split into five themed tracks, with the winner of each track also claiming £10,000. DotPlot won the competition’s Health & Wellbeing track.

Polarise is a platform to see and control what information devices and services hold and reveal about you. Their DEPTH Network technology securely tunnels all device traffic to their servers to predict what information about the user they are revealing. This can then be seen on an app, allowing users to stop information exposure simply.

FlexSea are developing novel bioplastic films derived from seaweed, with the potential to replace single-use flexible plastic packaging in both food and non-food applications. The team say that FlexSea is home compostable and degradable, disappearing in nature within 8-12 weeks without leaving any harmful traces behind.

Two additional prizes were awarded to teams who challenged the status quo and whose work has a positive impact on society.

The Moonshot Prize was awarded to MakeSense for challenging the status quo and pushing boundaries of innovation. They were awarded £10,000 for their innovation to build technology for visually impaired people.

The Social Impact prize of £10,000 was awarded to Oshen for their work inspired by a desire to have a positive impact on society. This team are developing a small sailboat designed for long, fully autonomous passages in harsh marine environments.

This year’s competition is powered by Huawei.