An award-winning scientist and a retail sustainability champion were amongst special guests who joined over 700 students at the University of Bedfordshire’s March graduation ceremonies. 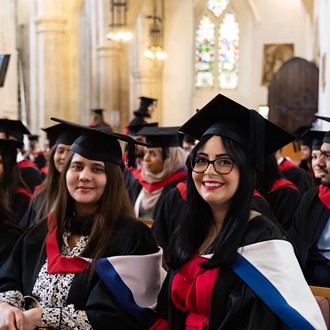 Held at St Mary’s Church for the first time since the disruption of the Covid-19 pandemic, undergraduate, postgraduate and PhD students from across the University celebrated their achievements in the glorious spring sunshine, surrounded by their lecturers, mentors, friends and family at the Luton campus.

It was also the first time in over two years that the University awarded two honorary degrees to special guests and friends of Bedfordshire. Professor Rebecca Bunting, Vice Chancellor, presented the Honorary Doctorate degrees to Richard Walker and Dame Jocelyn Bell Burnell, as well as congratulating each graduating student as they walked across the ceremonial stage.

Addressing the graduates, she said: “Graduation is not just a ceremony, it’s a turning point in your lives. You’ll look back on all your hard work, all the amazing experiences you’ve had and the friendships you have made. It’s also a time to reflect on the challenges you have faced and how you have overcome them – you have all had to deal with the many challenges of the pandemic. So we look back on all that and say well done, we are very proud of you.” 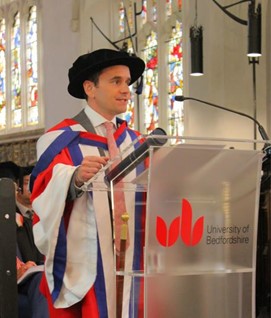 At the Business School’s graduation ceremony, Richard Walker, Managing Director of Iceland Foods, was awarded an Honorary Doctorate of Science in recognition of his outstanding services to sustainability in retail and business. Under his leadership, Iceland Foods has reported a drop in carbon emissions by 74% since 2011, and a reduction in food waste by 23% in the last two years. A committed environmentalist, Walker holds influential roles with a number of charities and foundations – including the Iceland Foods Charitable Foundation, Fauna & Flora International, Surfers against Sewage and the Wildlife Trust – and is a World Economic Forum Young Global Leader.

The University – which is tackling carbon emissions and encouraging climate action through its Target Zero initiative – commended Walker for his shared commitment to the environment and sustainability.

Upon accepting his award, he commented: “I am truly grateful for the huge honour that the University has bestowed upon me, which I gladly accept – not just for myself but for all the 30,000 Iceland colleagues who work with me to serve our customers, support our communities, improve the environment, and pay the taxes that fund everything from schools and higher education to hospitals, medical research, defence and the arts.” 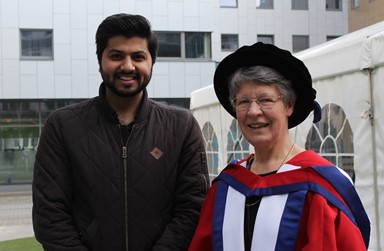 During the Faculty of Creative Arts, Technology & Science’s graduation ceremony, Dame Jocelyn Bell Burnell was awarded an Honorary Doctorate of Science in recognition for her services to science and widening participation for girls and young women in STEM.

Bell-Burnell is a world-renowned astrophysicist who became famous for her discovery of radio pulsars while studying at the University of Cambridge in 1967. She was the first female President of the Institute of Physics (UK and Ireland), the first female President of the Royal Society of Edinburgh and in 2018 she was awarded a ‘Special Breakthrough in Fundamental Physics’ prize worth £2.3 million, which she donated to help female minority and refugee students seeking to become physics researchers.

Bell-Burnell has been a friend of the University for some time, having hosted an inspiring public lecture titled ‘We Are All Made of Star Stuff’ back in January 2021. 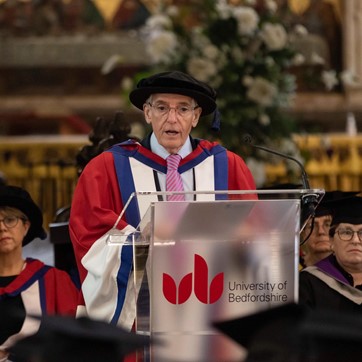 Speaking after the graduation ceremony, she said: “I feel very honoured to receive this degree. It’s been a real pleasure to be part of the ceremony as well. It’s a very special ceremony for the students who of course have studied during the pandemic and have achieved so much. So it’s fantastic to be amongst them in celebration – the atmosphere is fantastic!”

Dr Peter Carter OBE – a local mental and general health consultant – was also in attendance as a Guest of Honour at the graduation ceremony for students of the Faculty of Health & Social Sciences. Previously awarded an Honorary Doctorate of Science in 2018 for his services to healthcare across the region, Dr Carter is now an active member of the University Court and was asked to deliver a special speech to this year’s social and health care cohort.

Following the three in-person ceremonies held between the 23rd – 25th March, a remote ceremony was also held online on the 28th March for students and their families who were unable to attend the on-campus celebrations.