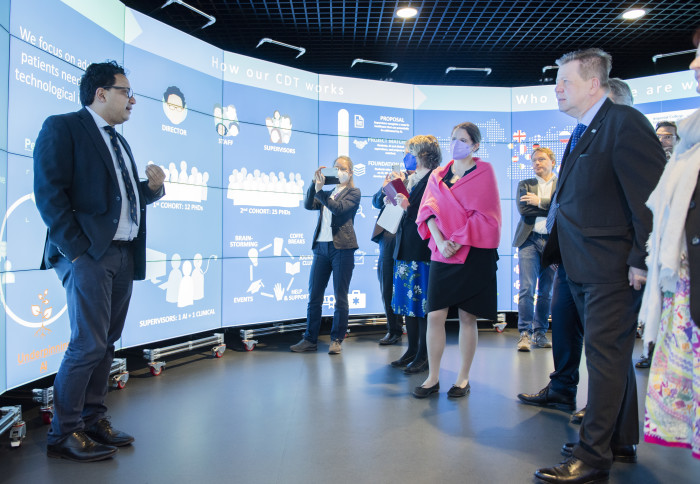 Academics at Imperial gave updates to leaders from the Committee for Culture and Science of the Bavarian State Assembly on some of Imperial’s flagship Academic Strategy Projects as London and Bavaria R&D collaborations continue to grow.

I-X presents a new way for academia and industry to collaborate deeply, using machine learning to tackle our greatest challenges. Based at Imperial’s White City Campus, I-X serves as a blueprint for the university of the future.

Professor Faisal and colleague Professor Paul Aylin, from the School of Public Health, presented  how Imperial academics are working with the National Health Service (NHS) to support the diagnosis, monitoring and
improvements in efficiency of care delivery, thereby boosting survival, quality of life and reducing costs and delays in treatment.

Professor Aldo Faisal, Professor of AI & Neuroscience at the Department of Computing and the Department of Bioengineering, updated the group on the Imperial-TUM Joint Doctoral Academy, a flagship programme to build high impact research capacity between London and Bavaria.

The first cohort launched in October 2020 and focused on the theme of ‘Artificial Intelligence, Healthcare and Robotics’. Professor Faisal co-leads a project which may help robotic hands become more effective.

The second PhD cohort launched last year with projects focused on the theme of ‘Mathematics of Information: Theory and application’.

The third cohort between the two institutions is focused on the ‘Circular Economy’ and is currently open for applications.

Imperial and TUM signed an agreement to strengthen their ties in innovation and industry at the recent Bavaria – London Business Forum, with recognition that links between the White City Innovation Ecosystem of Imperial and the Garching High Tech Campus of TUM can provide a key pivot point for accelerating R&D and economic activity.

The research, education and innovation programme aims to inspire fundamental changes in areas such as the way materials are used in manufacturing, how we produce food and energy, and will help mitigate the impact of air pollution on people’s health.

Led by materials scientist, Professor Ryan, the initiative will bring together researchers across Imperial and will build new partnerships that converge disciplines, from fundamental science and engineering, systems thinking, human health, new business models and policymaking, to realise a new zero pollution future.

Professor Robert Shorten presented the I3-Lab: The Imperial-Iota-Infrastructures Lab, a lighthouse for translational research activities in the area of the circular economy. The IOTA Foundation is a Berlin-based non-profit foundation which supports research into distributed ledger technologies and promotes their adoption.

Germany is Imperial’s top European research collaborator with around 1,500 research papers published between Imperial and German academics every year.

Imperial and Technische Universität München (TUM) have formed a strategic partnership in education, research and innovation.