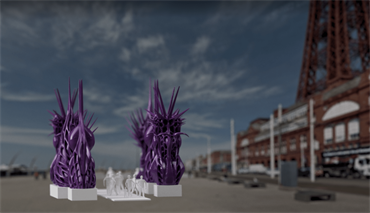 A spectacular programme of marketing and events has been unveiled as Blackpool looks to celebrate its first full tourism season for three years.

At the annual season launch, the first to be held since 2019 because of COVID disruption, VisitBlackpool and resort partners showcased a myriad of new attractions, shows and events for the year ahead.

The plans were revealed to an audience of around 300 hoteliers and other tourism businesses at the launch event in the newly-opened £30m Conference and Exhibition Centre in the historic Winter Gardens. The plans include:

It was also revealed that a major new TV ad campaign is being developed in partnership with Merlin Entertainments. It will be aired from late May onwards as the resort seeks to capitalise on domestic staycations and maintain its place as the UK’s most popular seaside destination.

Cllr Lynn Williams, Leader of Blackpool Council, told the audience that the resort was committed to building on the success of last year when a £1m council investment to kick-start the post-pandemic recovery resulted in record visitor numbers.

“This is our first full year of tourism since 2019 and we are determined to make it a year to remember. Over the past two years we have worked extremely closely with our resort partners to ensure that Blackpool could emerge from the pandemic in a position of strength.

“Our substantial investment in marketing and events last year resulted in a spectacular recovery with some of the highest visitor numbers we have ever witnessed over the final part of the year.

“This year we will look to build on that with new events, the welcome return of some old favourites and one of the most ambitious TV campaigns we have run for many years.”

Blackpool’s Illuminations Switch-On concert will once again be broadcast live from the magnificent Tower Ballroom and streamed to a global audience.

The event on Friday 2 September will be staged in association with MTV and will feature live music performances in the iconic ballroom with an audience made up of more than 2,000 winners of a free-to-enter ballot. It will trigger four months of Illuminations in the resort.

The annual event, one of the biggest in Blackpool’s calendar, moved indoors during 2020 and 2021 due to pandemic restrictions, but has proved so successful that it is being repeated for a third successive year – although this time with a full-capacity audience in the ballroom.

This year, the concert and Switch-On moment will be live streamed across MTV and VisitBlackpool channels, and event organisers are also exploring the possibility of streaming the event to an outdoor audience on the Tower Festival Headland.

Full details of the acts that will perform at this year’s event will be revealed over the coming weeks along with the identity of the Switch-On star.

The ballot for free tickets will open on Monday 4 April at 10.00 am, with an initial allocation of 2,000 tickets to be split equally between Blackpool residents and visitors. There is a maximum of four tickets per person.

“Last year’s dual format proved hugely successful with a live audience in the Tower Ballroom, but with people across the world being able to watch the Illuminations Switch-On concert no matter where they are.

“That live stream provides huge publicity for what is a vital part of the year for our tourism businesses and we are keen to build on that.

“Given the number of people who turned out on the Promenade last year on Switch-On night we are actively exploring ways in which they can watch the live stream in the outdoors and share the joy of Switch-On night.”

“We are delighted to be back in Blackpool, producing the Illuminations Switch-On Concert in association with MTV, bringing the best and brightest music artists to the resort, and showcasing the event on a global level.”

Enter the ballot from 10.00am on Monday 4 April

The Switch-On event on September 2 will trigger four months of Illuminations and will also see the unveiling of the biggest 3D installation ever seen in the annual display.

Odyssey has been created by international designer Jack Irving in collaboration with a team of computer scientists from Lancaster University.

Standing almost 10 metres high, the installation comprises six large-scale structures that are combined with state-of-the-art technology to create an immersive and interactive projection show themed on creatures from the deep sea.

Odyssey, which is being built at the Blackpool Illuminations Lightworks factory, will be located on the Tower Festival Headland opposite The Blackpool Tower where work is also underway on re-imagining the section of lights along the Golden Mile.

Jack, who grew up in Blackpool and produced costumes for the Hot Ice show at Blackpool Pleasure Beach, has since gone on to specialise in extravagant, wearable art sculptures and has created amazing costume designs for the likes of Lady Gaga.

He and the university team created the Odyssey concept in a competition to deliver a new installation for the Illuminations. It attracted designers from all around the world.

Blackpool is aiming to celebrate the Queen’s Platinum Jubilee in style – with a spectacular parade of its heritage trams.

The event, which is being staged in association with Blackpool Transport, is planned for the afternoon of Thursday 2 June, the first of the two public holidays over the extended Jubilee weekend.

Around a dozen heritage trams from the Blackpool fleet will travel in convoy from the Pleasure Beach to North Pier, creating the largest tram parade the resort has ever staged.

Although the historic trams were officially “retired” when new European-style trams were brought into service on the seafront route in 2012, a number of them were retained and thanks to an army of volunteers have been brought back into regular use. They now form one of the finest heritage fleets in the world.

The parade will be complemented by various other events over the four days including a giant outdoor picnic, beacon lighting and a fireworks display at Blackpool Pleasure Beach.

Further details of the tram parade and other Platinum Jubilee celebrations will be announced over the coming weeks.

A new pocket-size events guide has been produced to mark the start of the 2022 tourism season in Blackpool.

Copies of the guide can be picked up at the Tourist Information Centre on Central Promenade or it can be viewed online.

Works due to start on Blackpool Central

The sums add up for accountancy business