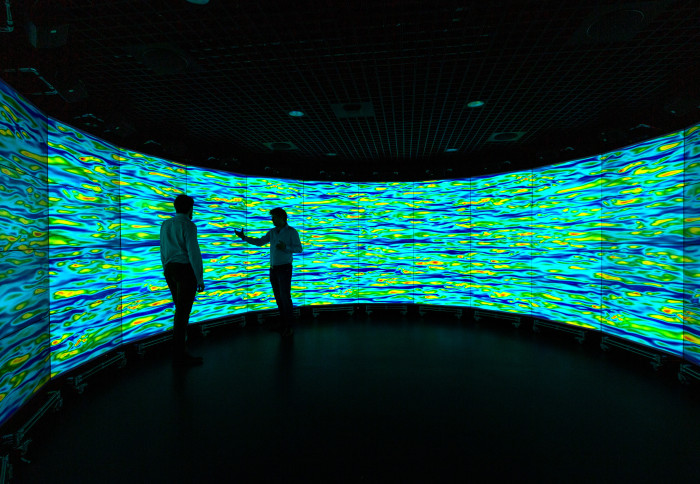 A research centre to tackle the world’s biggest challenges has been launched by Imperial and France’s National Centre for Scientific Research (CNRS).

Leading British and French scientists will work together at the CNRS-Imperial International Research Centre for Transformational Science and Technology (IRC) on a broad range of research areas – and major European-funded projects.

Powered by the two prestigious institutions’ world-leading expertise in mathematics and data science, the partnership will work in areas such as artificial intelligence, climate change, material sciences, medicine and chemistry.

The Centre – the first of its kind to be launched by the CNRS in the UK or Europe – will also see the two institutions collaborate on early-career researcher training such as PhD programmes, research funding and proposals including with Horizon Europe, as well sharing facilities, laboratories, infrastructure and data.

Both institutions will also work towards the UN’s Sustainable Development Goals (SDGs) and to new science and technology partnerships across the globe, including linking CNRS and Imperial research units working across Sub-Saharan Africa, Latin America and the Indo-Pacific region.

“This partnership demonstrates Imperial’s commitment to strengthening our ties with Europe through improving mobility and providing opportunities for researchers to exchange ideas.” Professor Alice Gast President of Imperial College London

“The CNRS-Imperial International Research Centre will bring about the highest level of collaboration between French and British scientists.”

Professor Gast added: “We hosted the UK’s first joint mathematics laboratory with the CNRS and are now even prouder to be partnering in their first International Research Centre in the UK and Europe.

“Working together we will make an impact globally for the public good in sustainability, health and resilience.”

Antoine Petit, Chairman and Chief Executive Officer of the CNRS, said: “We celebrate the launch of this International Research Center (IRC), created jointly with Imperial College London. It is the first of its kind in the UK and in Europe, and only the second one in the world.

“It will be a creative hub of cross-disciplinary collaboration and a solid platform for building new scientific projects between the CNRS and Imperial, addressing major challenges for the benefit of society. The Centre will also give even greater momentum to the long-term strategic partnership between our two institutions, acting as a bridge of knowledge and learning between France and the UK.”

The CNRS is Europe’s top institution in terms of receiving European Union funding and its number of European Research Council grant awards.

Imperial and the CNRS also announced the latest joint PhD projects to be funded by the two institutions.

“These new PhD collaborations will focus on digital transformation and finding solutions to some of the most pressing global challenges.” Professor Richard Craster Dean of the Faculty of Natural Sciences at Imperial and Director of the Abraham de Moivre International Research Laboratory

Professor Richard Craster, Dean of the Faculty of Natural Sciences at Imperial and Director of the Abraham de Moivre International Research Laboratory (IRL), said: “Since we launched our joint PhD programme with the CNRS, our students have contributed to advancing our research understanding in areas such as mathematics, physics, computing and aeronautics.

“We see great opportunities to further grow our research connections and develop the next generation of outstanding academics. These new PhD collaborations will focus on digital transformation and finding solutions to some of the most pressing global challenges.”

Alain Schuhl, Chief Science Officer of the CNRS, said: “PhD candidates will be, of course, major players in the IRC, which will provide a great environment for them.

“The PhD Joint Programme with Imperial reflects the excellence of our partnership. Once again, we were impressed by the quality and diversity of the proposals we received. The five projects that were selected this year span chemistry and physics. The 10 PhD candidates (five at CNRS and five at Imperial) will reinforce the collaboration and develop new axes of cooperation within the IRC.”

The CNRS-Imperial PhD joint programme will soon have a cohort of over 30 PhD student and 30 Academic Co-Leads working on major collaborative projects that will benefit UK, French and European science.

Imperial and the CNRS both support the Stick to Science campaign, a pan-European effort to expedite the association of Switzerland and the UK to Horizon Europe.

President Gast said: “Following the UK’s exit from the EU it is more necessary than ever to strengthen ties with our partners in Europe. On both sides of the Channel, Imperial and the CNRS are very keen to maintain close links and create new ones between their teams.
“Imperial is home to some of the world’s most talented scientists and we continue to achieve success with proposals for Horizon Europe funding, including European Research Council grants.

“Already this year we have won more than €10million in Horizon Europe funding overall. This success recognises the value that Imperial and UK-based scientists offer to the European scientific community. We urge that UK association to Horizon Europe is finalised soon.”