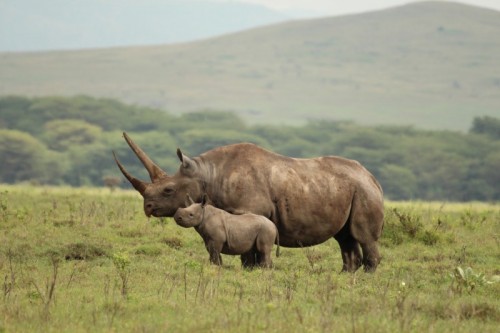 Lead author on the work, Dr Nick Harvey Sky said: “This study shows that poaching has effects on rhinos beyond the death of targeted individuals. The deaths of healthy females that would have gone on to produce lots of calves can make whole populations more vulnerable to extinction.”

This information is available for the Critically Endangered eastern black rhino because of intensive monitoring to protect them from poaching. The University of Manchester has collaborated closely with Kenyan rhino managers, scientists and security teams who have meticulously recorded births and deaths for decades. Across three Kenyan populations of black rhinos on Lew Wildlife Conservancy, Ol Pejeta Conservancy and Ol Jogi Wildlife Conservancy, the researchers found that there is significant variation in breeding success between females, with many females not breeding or doing so very slowly.

Dr John Jackson, Post-doctoral researcher at the University of Oxford said: “For me, our study really highlights a deadly combination of small populations, individual differences, and poaching for vulnerable populations. When working in combination, these factors can completely reshape the fate of an endangered species.”

Crucially, variation in female breeding success can exacerbate the effects of poaching, especially on small populations. If key individuals, ones that breed very well, are killed then it can make the whole population more vulnerable to extinction. This highlights how important it is to protect rhinos from poaching. It may be possible to even out the variation in breeding success by creating new rhino reserves, moving rhinos between current reserves, or even creating more valuable habitat, but the causes of reproductive skew must first be identified. Differences between individuals in their contribution of young to at risk populations is likely an issue across many more species and should be evaluated when assessing their risk of extinction.