Hundreds of rare fish on the Red List of Threatened Species have moved into their new home at Easton College, after the college and Zoological Society of London (ZSL) joined forces to work together for wildlife.

Easton College is one of only two agricultural colleges in the country to have been included in ZSL’s freshwater fish breeding programme, based at ZSL Whipsnade Zoo in Dunstable.

The programme has been set up to tackle the extinction crisis affecting the planet’s freshwater fish – by refining freshwater fish breeding capabilities and housing populations of threatened fish in key facilities as back-up populations. 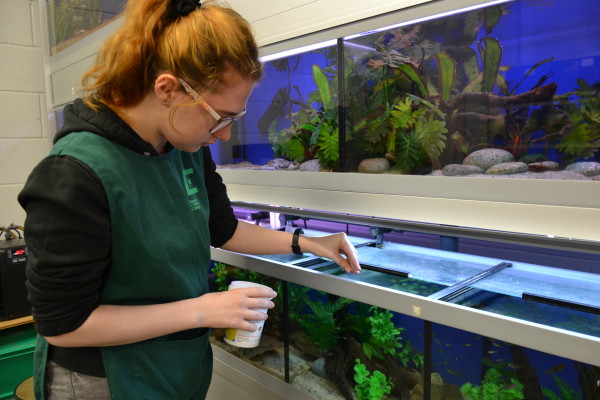 The fish were delivered to Easton College’s specialist Aquatics Room, housed within its Animal Care Centre, after being carefully transported 116 miles by road under the supervision of ZSL staff.

The setups of the aquariums in which the fish are now living were designed by students who are following the zoological pathway on the college’s Level 3 Diploma in Animal Management.

The students had to research each species, understand its requirements, and create as naturalistic a home as possible for the fish.

Students from this course, together with Animal Science degree students, will be involved in the ongoing care of the fish, under the expert guidance of the college’s staff.

Jordan Mackay is one of the Animal Management students who helped prepare the tanks for the arrival of the fish. Jordan said:

The aim with the tanks was to make them as realistic and natural as possible for the fish, to make sure they are comfortable in their enclosure, so they can breed. I love working with animals in general. I would like to work in a zoo and work with endangered animals and be able to breed them and release them back into the wild to boost up their numbers.”

The six threatened species of freshwater fish now under the care of Easton College are:

All of these species are on the International Union for Conservation of Nature (IUCN) Red List of Threatened Species.

This is a global problem that is due to factors including water pollution, damming and drainage of waterways, over-fishing, and the introduction of invasive species.

These fish do a lot for the natural ecosystem out in the wild. So if we can help keep their numbers up, it means that if anything was to happen to them in the wild we do have a back-up species. It’s really good for conservation.”

Collaborative breeding is a key part of ZSL’s programme to protect the world’s most threatened and neglected species of freshwater fish.

Easton College’s Head of Animal and Equine, Chris Sturdy, who previously managed the aquariums at SEA LIFE in Great Yarmouth and has more than 10 years’ experience in managing large aquariums, was instrumental in bringing the endangered fish to the college. Mr Sturdy commented:

Whilst these are some of the little guys of the freshwater fish world, the fact that they are so rare and endangered makes them hugely important. I am very excited that staff and students at Easton College have this opportunity to make a big impact on the future survival of these species.

Being accepted to take part in ZSL’s freshwater fish breeding programme is a real endorsement of the facilities, staff expertise, and high standards of animal care we have at Easton College. It also provides a fantastic opportunity for our students to learn about and play a direct part in the protection of these endangered species.”

We are delighted to be collaborating with Easton College to conserve these remarkable species and to help address the wider freshwater biodiversity crisis.”