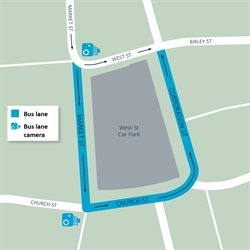 The council is proposing to install the cameras, which will enforce restrictions between the hours of 10.30am and 6pm, on the corner of West Street behind the Municipal Buildings and on the corner of Market Street and Church Street, to deter drivers who flout the law by driving in areas designated for buses and taxis.

Across many other towns in the UK, bus lane enforcement has been introduced to improve bus journey times and reliability of services for passengers, as well as to ensure that emergency vehicles and taxis maintain access to key areas.

As part of ‘Making Blackpool Better’ plans, Corporation Street now has more space for buses to stop and wait, making it easier for passengers to connect with other services in the town centre. Recent work has included widening the road for safer access for buses and taxis, as well as improving the road and pavement surfaces.

If approved, the next phase of the plans would include the introduction of the cameras. Cabinet Member approval has been granted for the council to publish public notices in The Gazette. From the date the notices are placed (6 September 2021), there is a minimum three-week consultation period during which any comments will be considered. If, following the period of consultation, the scheme is approved, the council will make the order to proceed with the improvements.

It is intended that the cameras will operate from 10.30am to 6pm, seven days a week, enforcing restrictions during this timeframe. Only buses, taxis and authorised vehicles will be permitted during those times, and clearly signposting will ensure that motorists are aware that enforcement is taking place.

If installation proceeds, an initial grace period will be in place during which any unauthorised driver using the bus lanes will be issued with a warning letter rather than a fine. This is to ensure that motorists have time to familiarise themselves with the new changes.

As part of the plans, drivers who persist in using the bus lanes will be fined £60. However, if payment is made within 14 days of the Penalty Charge Notice (PCN) being served, the charge will be reduced to £30. If payment is made after a service of charge certificate (after 28 days), the fine would increase to £90. Any PCNs issued will include full details on what to do, how to pay and how to appeal.

“By improving bus journey times, we hope that people will be encouraged to use public transport which will then ease town centre congestion.

“The council have recently declared a climate emergency and we are working hard to reduce our carbon emissions. Making it easier, safer and quicker for people on public transport is part of our commitment to a greener Blackpool.

“The bus lanes are there to give priority for buses and introducing the cameras would help to ensure that everyone follows the rules, and the system works as it should.

“In the past, people have abused the bus lane by parking in taxi and bus bays. Hopefully the introduction enforcement cameras can provide a deterrent to any driver who is tempted to abuse the bus lane.

“We hope that the public will support us in ensuring that drivers use the legal routes around the town centre.”

Be the first to hear about new developments in the town centre – sign up to news alerts via Blackpool Council’s Making Blackpool Better page.