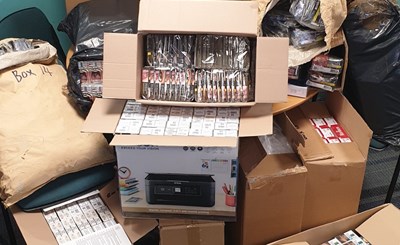 While police were responding to an incident at a property in Southgate Street in Gloucester on 19 April 2022, they forced open a locked entrance to the attic where they found a significant quantity of suspected illegal tobacco and cigarettes.

They called trading standards who then attended and seized 6,029 packets of cigarettes and 715 pouches of hand rolling tobacco, which had been stored in bags and boxes.

There were also several empty boxes, indicating that the original quantity of stored cigarettes and tobacco had been considerably greater.

The items were examined before they were seized and officers found they did not comply with UK labelling requirements and included counterfeit cigarettes, which had been branded Richmond.

Excise duty would not have been paid and packs of Marlboro cigarettes also discovered were specifically marked ‘for duty free sale only’.

The seized items had a street value of more than £41,000 and trading standards suspect the cigarettes were part of an organised supply chain supporting sales of illegal tobacco, which costs the UK taxpayer around £2.3 billion a year.

The trading standards investigation is ongoing.

Cllr Dave Norman, cabinet member for trading standards, said: “I would like to thank our colleagues at Gloucestershire Constabulary for alerting us to this illegal tobacco stash. We will continue to work closely together to ensure there is no hiding place for anyone trying to sell counterfeit products. It harms the trade of legitimate suppliers and poses a risk to public health.”

Inspector Ash Shingler, of Gloucester Neighbourhood Policing Team, said: “This was a fantastic find by our officers of a significant amount of illegal tobacco and cigarettes. These counterfeit products can do serious harm to people’s health, as well as the wider negative impact on local businesses and the community.

“This once again demonstrates the strong partnership we have with other agencies. We will continue to work closely with our partners in trading standards to tackle rogue traders and make our city a safer place to live and work.”

Have your say on future of Tewkesbury Library