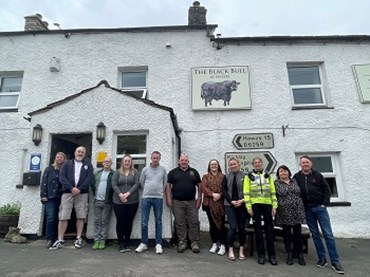 Members of the recently formed Kirkby Stephen Pub-watch Group met at the Black Bull Inn at Nateby on Monday 9 May to discuss the group’s activities and recent expansion.

The group was formed in March of this year and initially consisted of the main pubs in the town. However, the last two months have seen the group’s number swell to 12 pubs, including those from villages in the surrounding area.

The motto of the National Pub-watch scheme is “Stronger Together” and the aim of the group is to ensure that when people go out to pubs they can do so in a safe environment, without fear of threats, abuse, intimidation or harassment.

“The aim of this group is to make all licensed premises within the Kirkby Stephen area a safe and enjoyable place to socialise with friends and family and to enjoy the superb products that we all have to offer.

“The group will also be able to keep on top of licensing matters and any developing trends that could impact on licensed premises. This does not mean that there will be any changes to our pubs and clubs and you will still receive a warm welcome in all of our establishments.”

“All the members of the Group also use the Kirkby Stephen Licensed Premises WhatsApp Group. This helps them keep in touch and to communicate quickly, if there are any issues.”

It’s hoped that the success of the Pub-watch scheme will help it expand to all licensed premises, between Tebay and Brough in the Eden area.

Cumbrian band to perform at Town Hall in October