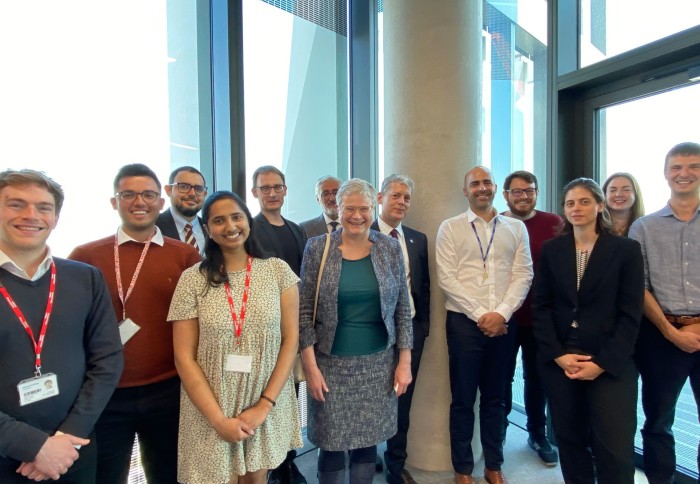 A team of Brazilian and UK scientists played a key role in identifying some of the most devastating COVID-19 variants, such as P.1.

The Centre for Arbovirus Discovery, Diagnosis, Genomics and Epidemiology (CADDE) brings together academics from Imperial, University of Oxford, and partners in Brazil, and is at the forefront of genomic analysis and the COVID-19 response in Brazil. The Centre is jointly lead by Dr Nuno Faria at Imperial College London and Professor Ester Sabino at the University of São Paulo.

Recently, the director of the São Paulo Science Foundation (FAPESP) Professor Luiz Mello, and Councillor Head of Academic Section at the Embassy of Brazil in London visited the CADDE team at their new laboratory at Imperial College’s White City Campus.

The CADDE team builds on experience from the ZiBRA project during the Zika epidemic in 2017, and the yellow fever epidemic in 216-2018 during which genomic surveillance capability in Brazil was mobilised. Funded by the Medical Research Council, this Brazil-UK partnership team used mobile labs to analyse virus outbreak samples and provide important epidemiological information about the spread of these diseases.

Dr Nuno Faria said: “We developed partnerships with national and international research and public health teams including the Brazilian Ministry of Health, COG-UK, the Arctic Network, and the World Health Organisation. These networks helped us to rapidly build sequencing capacity and share findings with partners from all over the world.”

CADDE was launched in 2019 and is housed at Imperial College London’s MRC Centre for Global Infectious Disease Analysis. This unique partnership between the University of Sao Paulo and several UK based universities is supported by the Medical Research Council (MRC) and the São Paulo Science Foundation (FAPESP).

Within 48 hours of the first confirmed cases, CADDE scientists sequenced SARS-CoV-2 in Brazil in late February 2020. The viral genomes were made available on the GISAID global data sharing platform for SARS-CoV-2 genomes. Computational models utilizing subsequent SARS-CoV-2 genomes from Brazil helped the team monitor the global spread of the virus and the track impact of non-pharmaceutical interventions on SARS-CoV-2 spread in Brazil.

In January 2021, the team sequenced the first cases caused by P.1, Gamma variant of concern, in Manaus, and provided the earliest reports of its altered epidemiological characteristics. The team identified this variant of concern as the cause for a resurgence in cases following a large wave of infections earlier in 2020. The researchers explain that the potential of these new variants to escape naturally and vaccine- induced immunity highlights the need for a global vigilance and the importance of genomic surveillance and international data sharing.

CADDE scientists have developed an extensive network of collaborators across the world. Dr Nuno Faria said: “Infectious diseases do not obey border controls, and societies all over the world will always be better prepared when scientists work together when tackling global pandemics.”