A poem told by NHS staff about the care of an end of life patient – through the location of a hospital lift – was praised after being showcased at a local arts festival. 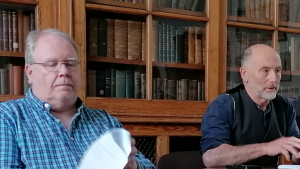 The poem, written and performed by staff at North Tees and Hartlepool NHS Foundation Trust, was highlighted at the Darlington Arts Festival on Saturday.

The poem – Sonnets from a Hospital Lift – tells the story of a dying patient who is visited by his wife in his final days.

Told from within the space of a hospital lift at the University Hospital of North Tees, it focuses on the emotions and experiences of people who step inside it.

Mel McEvoy, nurse consultant in palliative care at the Trust, wrote the poem some time ago and was invited to perform it at the festival.

He said: “This single multi-part poem consists of a series of monologues in sonnet form that take place in a hospital lift. The whole poem is an attempt to listen to the composite voice of a hospital.

“I wanted to tell the story of a patient being visited by his wife – and the impact this patient had on so many of those staff who were caring for him.

“Our outstanding staff do so much for our patients and every experience – both positive and negative – involving the care of patients has an effect on them.

“This was my way of showing what death can mean not just to a relative but to the staff who treat our patients.

“The poem has already been showcased at the Trust as part of an awareness event called Dying Matters Week – this was a further opportunity to highlight it outside of the organisation.

“The feedback we received after was that people were moved by the story – it really made it clear the experience of hospital life.”

The poem was performed by Mel, alongside clinical effectiveness advisor John Blenkinsopp who both played the parts of various different voices.

Among the feedback following the event, one viewer wrote:

“We thought the whole thing was brilliant.  Very emotional, yes, but so full of insight and awareness as to how NHS workers see themselves and are seen by others, with all the weight of expectation placed upon them.

The emotional states and various behaviours of patients so delicately explored, too.  Some of the sustained metaphors were grimly effective eg the cricket images – though I smiled at how cleverly you had strung them together.

Everyone joining the NHS should be given a dose of this as part of the training.  You may have noticed some of the tears around the room, and the stunned silence at times.”

To view a performance of the poem from the hospital’s spirituality centre, visit https://www.youtube.com/watch?v=iiw0SbYzSKc

Hop, Skip and Jump over to Brierton this National Fitness Day

Outdoor cinema, a community choir, a Ukrainian classical singer and a Ceilidh announced among programme highlights