Arrests made in connection with boat burglary in Ilfracombe 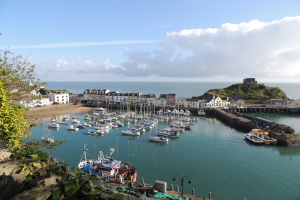 Ilfracombe’s Harbourmaster teamed up with Devon and Cornwall’s Police Community Support Officer earlier this month to deal with a report of a burglary which had taken place on the Ilfracombe Princess Boat.

The offence, which took place during the afternoon of Monday 9 May, was reported by the skipper of the boat, which was moored at Ilfracombe Harbour.

Georgina says: “We always try our best to act quickly on reports that are made to us. By working collaboratively, we were able to review the CCTV and obtain information on the suspected culprits. We want to give confidence to our harbour users that reports made to us will be actioned quickly and therefore we would encourage users to please report any issues to us as soon as possible so incidents can be addressed.”

Andy says: “Ilfracombe Harbour is a beautiful area of the town and a draw for the local community and visitors alike. Incidents of crime and anti-social behaviour which impact this will not be tolerated and will be dealt with swiftly.”

A379 at Stoke Fleming to remain closed “for some time”