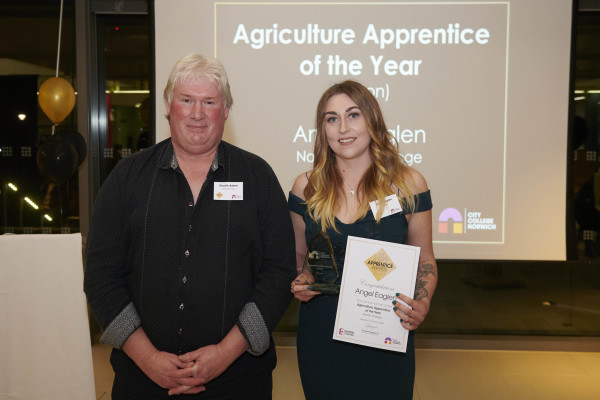 An Apprenticeship in Livestock Production has helped Angel Eaglen, who works for Norfolk Free Range, to change her career direction.

Ms Eaglen, who does not come from a farming background, initially set out to pursue a career as a marine engineer. However, she decided that this wasn’t for her, and returned from the Merchant Navy seeking new opportunities.

That was when a job with Norfolk Free Range, one of East Anglia’s leading pig farms, came up and Angel decided she would “give it a go”.

As Angel herself says, she has “not looked back” since joining Norfolk Free Range, and she was only too happy to sign up for the Apprenticeship when this was offered by her employer. Looking back on the Apprenticeship, which she completed in December, Ms Eaglen said:

I’ve definitely learned a lot. Obviously not coming from a farming background I didn’t have a clue at the start, but my manager has taught me everything there is to do on a pig farm.

Once I got started, I really got into it. The pigs have all got their own little characters and we make sure they are looked after to the highest welfare standards.

My assessors both came from a farming background, I got a lot of support from them too. The Apprenticeship has helped me to build my career. Eventually I would like to become a breeding manager or a farm manager at some stage.”

Opening doors to a better economy

Hospitality businesses: have you applied for support yet?

Council tax and our budget – your views matter!

Equine Diploma students go behind the scenes at Fakenham Racecourse