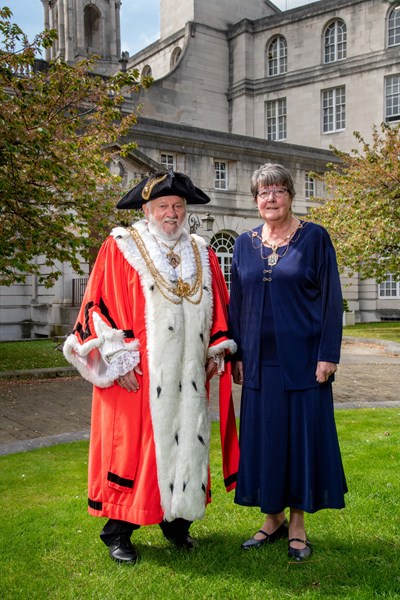 Councillor Robert W Gettings MBE JP has been announced as the new Lord Mayor of Leeds for 2022/23. He was handed the chains at the council’s Annual General Meeting yesterday (26 May), taking over from Councillor Asghar Khan.

Councillor Gettings is the 128th Lord Mayor of Leeds and he will be accompanied during his time in office by his wife and Lady Mayoress Councillor Lesley Gettings.

Born in Methley, Councillor Gettings moved to Morley as an eight-year-old boy, He attended Morley Grammar School and went to Newcastle to train as a teacher before returning home to Morley to teach at Woodkirk High School.

Throughout his adult life Councillor Gettings has supported civic society in Morley, including being a founding member of the Morley Literature festival, president of the Morley Music society and the Morley Operatic Society. In 2010 he received, from the queen, an MBE for services to children and work in the community.

The Lord Mayor of Leeds, Councillor Robert W Gettings MBE JP said: “I am absolutely delighted and feel extremely humble to be given the huge honour of representing our fantastic city of Leeds by becoming the new Lord Mayor for 2022/23.

“I have always had a strong sense of civic pride and I can’t wait to represent the people of Leeds over the next year. I have chosen four charities to support that all carry out vital work across Leeds, either through supporting the homeless or children with life-limiting illnesses.”