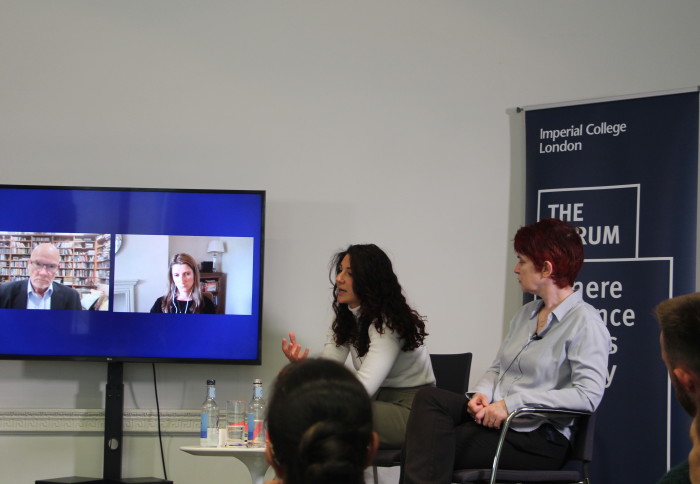 The UK government’s learning outcomes from hosting the UN’s climate change conference were explored at an Imperial Forum event.

With just 5 months until COP27, what has the UK learnt from hosting its predecessor in Glasgow and what should it do with the remainder of its presidency? The Forum, Imperial’s policy engagement programme, partnered with renowned think-tank, Institute for Government (IfG) to ask representatives from government, academia and civil society: What should the government learn from hosting COP26? This event was the first in a Forum-IfG series on different aspects of Net Zero, and the role that science and technology has to play in helping us achieve climate ambitions.

We’re still not where we need to be with adaptation and resilience. We need to better understand the challenges and we need to address them urgently. Innovation in adaptation is also a big opportunity – with huge potential benefits for prosperity, stability and wellbeing for countries which get it right. Professor Mary Ryan Interim Vice-Provost (Research and Enterprise), Imperial College London

Professor Mary Ryan, Interim Vice-Provost (Research and Enterprise) at Imperial, said that events like COP were critically important in focusing activities on the global scale necessary to combat climate change and other related issues such as biodiversity loss. For the first time, UK universities had come together ahead of COP26 to bring a unified voice from academia – the UK Universities Climate Network, helping to establish ‘science facts’ on the key issues. This network, led by the Grantham Institute for Climate Change and the Environment, has continued its work since and will now focus on the upcoming COP27.

Camila Born, deputy director, COP26 Unit within the Cabinet Office, explained the UK Presidency of COP26 had the additional challenge of reinventing the conference format to focus on the technical details of delivery of the commitments within the Paris Agreement – the legally binding international treaty on climate change which emerged from COP 21 in Paris, December 2015. Ms Born said that the UK’s flexibility in facilitating partnerships around the formal COP agenda had helped ensure it was a success, as well as the sustained global engagement from UK embassies worldwide.

With a few months left of the UK Presidency, Sepi Golzari-Munro, from the Energy & Climate Evidence Unit (an NGO supporting the debate on energy and climate in the UK), said that maintaining leadership in climate action in domestic policymaking and delivery was key to further progress. She said the UK’s success in Glasgow was down in part to the UK’s credibility in climate action, and it was crucial this was sustained.

According to Greg Bourne, from the Climate Council of Australia, the recent election in Australia, returning a Labor government for the first time since 2013 was a ‘climate election’. Looking forward to COP27 and beyond, he said that the Australian government would bring forward a new climate target of cutting emissions by 43% by 2030, going beyond the target of 28% set by the outgoing Liberal administration.

The panel also reflected on the impacts of the war in Ukraine on Net Zero ambitions and renewed political focus on energy security. There was disappointment and frustration with the incentivisation of fossil fuel usage and investment in the recent UK government announcement on windfall profits. However, the enforced disengagement from gas was seen by all as an opportunity to present net zero, and investment in clean energy, as a way to enable energy security and this was one that everyone, government, academia and industry, should take advantage of.

The next event, ‘How can the government achieve the UK’s smooth transition to electric vehicles?’ will take place on Thursday 9 June. Details are available on the IfG website.