Residents, officers, and councillors are celebrating as Dorset Council has completed its extensive improvements on the Castleman Trailway in East Dorset.

The Castleman Trailway is one of Dorset’s gentlest walking, cycling and horse-riding routes. It follows much of the old Southampton to Dorchester railway line and runs through some of East Dorset’s stunning landscapes whilst also connecting a string of settlements between Ringwood and Poole.

The trailway and its connecting paths are well used by people on foot, bike, and wheelchairs to make short trips to shops, schools, and workplaces, as well as for recreational trips.

But in recent years, the surface quality of the trailway had deteriorated and became extremely muddy after wet weather, reducing year-round access.​ Barriers and narrow gates also reduced access for some trail users.

Dorset Council Countryside staff, volunteers and contractors began work on the trail in October 2021, aiming to provide a wider, better quality surface, making it more accessible to a wider range of users. This included drainage works, new surfacing and regrading over 5.5km of the trailway from Verwood Road to West Moors.

Much of the route has now been widened, replacing two 1.5m wide paths with a single path of 4-5m. Barriers on the route have been replaced with bollards to improve accessibility for mobility vehicles and wheelchair users, as well as for people on bikes and horse riders.

Volunteers have also seeded verges with wildflowers, and new signage and benches will be installed shortly. 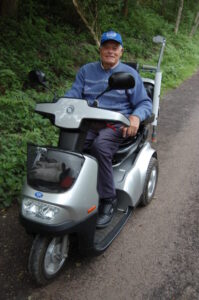 “It was impossible for me to use the Trailway before the upgrade as the galvanized steel barriers prevented access. The only way for me to get to Ringwood was to use the pavement running alongside the A31, this was within a metre away from racing traffic – very unpleasant and felt very dangerous. There was also the challenge of crossing the Horton Rd as traffic exited the roundabout.

“Now I can join the Trailway and take a quiet trip along it with an eye to all the nature on the way. It is a great benefit for me, and I expect many others, disabled or not.”

The scheme has cost around £180k, paid for mostly from the Department for Transport’s Active Travel Fund, aiming to provide alternatives to Horton Road/Verwood Road for trips between Verwood, Ashley Heath, Ringwood, and West Moors.

“I want to thank the volunteers, Council officers and contractors for all their hard work on this project. It’s vitally important we help provide accessible options for active travel as part of our Climate and Ecological Emergency strategy if we hope to entice people out of their cars and reduce Dorset’s carbon footprint.

The Castleman Trailway offers a beautiful and practical route for recreation or commuting, and it passes some of the county’s internationally important heathland, rivers, and forestry plantations, with excellent transport links whether you are on foot, wheels, or horseback.

We’re looking forward to local people and visitors checking out the new improvements, especially if they haven’t been able to fully access the route before now and see for themselves what the Trailway has to offer.”

Portland preparing to welcome The Queen’s Baton for Birmingham 2022