A trader has admitted six offences relating to the supply of dangerous sunbeds to the public following a long-running trading standards investigation.

He admitted the offences when he appeared before Teesside Crown Court on 6th June and is due to be sentenced on 22nd September in a case brought jointly by the Hartlepool and North Yorkshire Trading Standards Teams.

Following the hearing, Rachael Readman, Senior Trading Standards Officer at Hartlepool Borough Council, said: “This has been a protracted case, partly as a result of the impact of the Covid-19 pandemic on the legal system.”

“We are pleased to have been able to finally bring it to a successful conclusion and it demonstrates our commitment to ensuring the safety of the general public.”

She added that anyone with concerns about the safety of a home hire sunbed should contact Hartlepool Trading Standards on (01429) 523362.

The case dates back to April 2018 when the team was contacted by their colleagues in North Yorkshire who had received a complaint about the safety of a home hire vertical sunbed supplied by Golden Brown Sunbeds.

The consumer reported the sunbed as being rusty with a nail holding the hinges together. The bulbs were said to be filthy, and looked as though they had never been changed. An electrical expert inspected the sunbed and condemned it as dangerous after finding that it contravened the Electrical Equipment (Safety) Regulations.

Both Trading Standards teams tried to discuss their safety concerns with Mr Carlton, but it was apparent that he had little or no interest in complying with regulations. Amid fears that he was putting the public at risk of serious injury or fire, a Recall Notice was served on him and the company in July 2018 demanding that they recall their sunbeds. The company continued to trade in home hire sunbeds in breach of the notice. 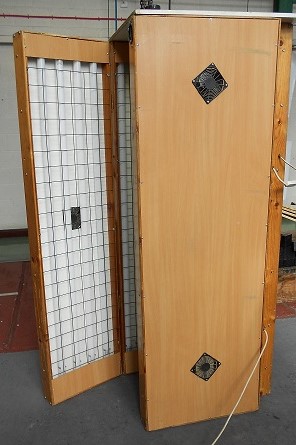 One of the sunbeds

Hartlepool Trading Standards decided to undertake a test purchase and hire a sunbed which was delivered to an address in Hartlepool on 11th October 2018. The sunbed was sent for testing and failed to comply with several separate safety regulations. A report confirmed that it was at risk of overheating and that the cable inner insulation had been cut, giving direct access to live conductive parts of 230 volts. Voltage as low as 50 volts can be potentially fatal.

Mr Carlton was obstructive and showed no interest in engaging with either local authority, prompting Hartlepool Borough Council to publish an Important Safety Warning regarding the Recall Notice on Carlton’s home hire sunbeds on 27th November 2018.

Despite legal cases being brought against Mr Carlton by both local authorities, the company continued to offer to supply home hire sunbeds on Facebook.  Hartlepool Trading Standards carried out a further test purchase and a sunbed was supplied to the team on the 27th November 2019. Mr Carlton delivered the bed in person despite claiming that he had ceased trading. This sunbed was examined by a qualified electrical engineer and found to contravene many separate safety regulations.