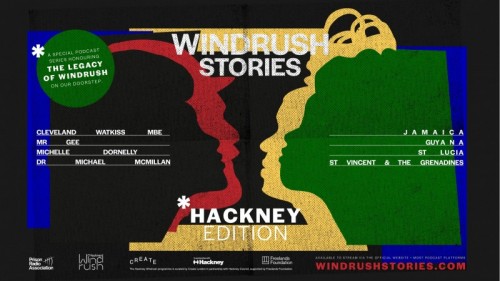 The first episode of a podcast series honouring the legacy of Windrush in Hackney is out today, marking the run up to National Windrush Day on 22 June and the unveiling of a new sculpture by artist Thomas J Price in Hackney Town Hall Square to celebrate the Windrush generations.

The Windrush Stories podcast, which has received funding from the Ministry of Housing, Communities and Hackney Council, is produced and presented by Windrush descendant DJ Flight aka Natalie Wright, and broadcast weekly to over 20k subscribers across all major podcast platforms.

The special edition series of the podcast, dedicated to Hackney, will comprise four episodes featuring conversations with Windrush descendants either connected to Hackney or the Windrush Artwork Commission. The episodes will be released throughout the month leading up to the unveiling of Thomas J Price’s artworks to help create awareness of Windrush Day and the far-reaching contributions of the Windrush generations in Hackney and beyond.

The episodes will feature interviews with:

A specially commissioned poster for the Hackney Windrush Stories podcast created by Graphic designer Abi Wright will also be put on display on public sites across the borough.

The podcast forms part of the Windrush Public Art Programme delivered by Hackney Council in partnership with Create and Freelands. The programme will also see the development of a new learning resource on Windrush to Hackney’s Diverse Curriculum; a zine titled ‘Selfies & Stories’ showcasing photos and poetry from workshops delivered in collaboration with Autograph and The Real Selfie project at CLR James Library in November 2021; and a new film work by award-winning Scottish-Barbadian artist Alberta Whittle using resources from Hackney Archives, screened later this year.

For more information on how Hackney is celebrating and supporting its Windrush generation, visit: www.hackneywindrush.com.

Listen to the first episode featuring an interview with award-winning vocalist, composer, actor, and voice professor at Trinity Laban Conservatoire, Cleveland Watkiss MBE, who was born in Clapton in 1959 to Jamaican parents.

Windrush Stories is a collection of full-length interviews from members of ‘the Windrush Generation’. People who became known as the Windrush Generation began arriving in the UK from the Caribbean nations in the 1940s. They travelled to embark on a new life helping rebuild the ‘Mother Country’ during the post-war period. This generation, and their children and grandchildren, have significantly influenced British society through sport, politics, art, poetry, literature, language, food, and most of all music. Listen to stories of lives lived in the UK and the enormous cultural influence this generation has had on British life.

All the Windrush Stories podcasts will be available here:

Listen to an interview with Veronica Ryan OBE whose Turner Prize-nominated sculptures unveiled in Hackney in October 2021 were the UK’s first public, permanent artwork to honour the Windrush Generation:

Thomas J Price was born in South London (1981). He received his BA in Fine Art Sculpture at Chelsea College of Art (2001-2004) and completed his MA in Sculpture from the Royal College of Art in (2004-2006.) Price’s practice spans sculpture, photography, film and animation. Price has held solo exhibitions at prestigious institutions including The Power Plant, Toronto, Canada; The National Portrait Gallery, London, UK; and the Yorkshire Sculpture Park, West Bretton, UK. Price’s sculpture ‘The Distance Within’ is currently on view in Marcus Garvey Park, New York, until October 2022 as part of ‘Witness’; a commissioned project with Studio Museum Harlem. In 2021 he joined the international gallery Hauser and Wirth. Price lives and works in London.

Create London is an arts organisation that has pioneered working with artists to realise new social enterprises, charities and cultural spaces. It commissions, curates and incubates long-term projects that are useful to society, supporting artists to work collaboratively with local communities. It reimagines the role of the artist in the city, working outside of galleries to find new and often surprising ways for art to become part of everyday life. Create London is an Arts Council England National Portfolio Organisation. https://createlondon.org/

Freelands Foundation was set up in 2015 to give more people the chance to engage with and enjoy the arts in the UK, with a particular focus on education. Their ambition is to give everyone access to art education in the belief that it raises their aspirations and transforms their opportunities in life. They have worked with more than 30 arts organisations across England, Scotland, Wales and Northern Ireland to support artists and broaden their engagement in their communities. https://freelandsfoundation.co.uk/

4 Courses You Should Be Taking With Point Blank LA –

‘We want the Met to make Hackney an exemplar of its new anti-racist approach’: Hackney Council welcomes new Commissioner’s plans to banish racism from force

Council to continue to provide improved accommodation in the borough