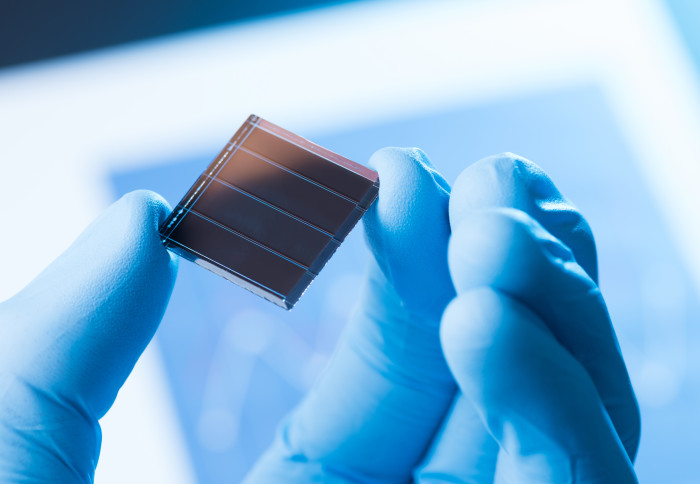 Researchers have tracked the first fractions of a second after light strikes solar cells, providing insights into how they produce electricity.

This work demonstrates the power of our new time-resolved x-ray technique, which can now be applied to a wider range of materials. Professor Jon Marangos

The method, developed by Imperial College London researchers, uses ultrafast lasers and x-rays to provoke a reaction and then to measure the changes it causes over just femtoseconds (quadrillionths of a second).

Now, a team of researchers at Imperial and Newcastle University has used the technique to study organic photovoltaic (OPV) materials that harvest the Sun’s rays to produce energy or to split water.

OPV materials are under intense study as they can provide cheaper renewable energy. However, many of the materials currently used are unstable or inefficient, due to the complex interaction of electrons that are excited by light.

Closer study of the fast interactions of these electrons, like the paper published today in Nature Communications that combines fast time resolution with measurements localised to atoms, provide valuable insights into methods for improving solar cells and catalysts.

Professor Jon Marangos, from the Department of Physics at Imperial, said: “OPVs are cheap and flexible alternatives to silicon-based photovoltaics, and so are an attractive prospect for use in future solar energy generation infrastructure.

“This work demonstrates the power of our new time-resolved x-ray technique, which can now be applied to a wider range of materials and may provide the understanding needed for making more efficient OPV devices.”

The team observed, for the first time, direct x-ray signatures of the initial state of the material when electrons are knocked out of position. This creates an electron and ‘hole’ pair, that can move through the material.

This initial state rapidly evolved into a new, more stable state in just 50 femtoseconds. Calculations by Professor Tom Penfold at Newcastle University agreed well with the observations, showing the initial state depended on the distance between chains of molecules in the material.

Dr Artem Bakulin, from the Department of Chemistry at Imperial, said: “This sensitivity of the time-resolved x-ray method to the initial electron dynamics occurring directly after excitation by light paves the way for new insights into the photophysics of a wide range of organic optoelectronic and other materials.”

The team now plan to explore the ultrafast charge dynamics in other organic semiconductor materials, including recently discovered materials that use different molecules as electron acceptors, which show enhanced OPV efficiency.