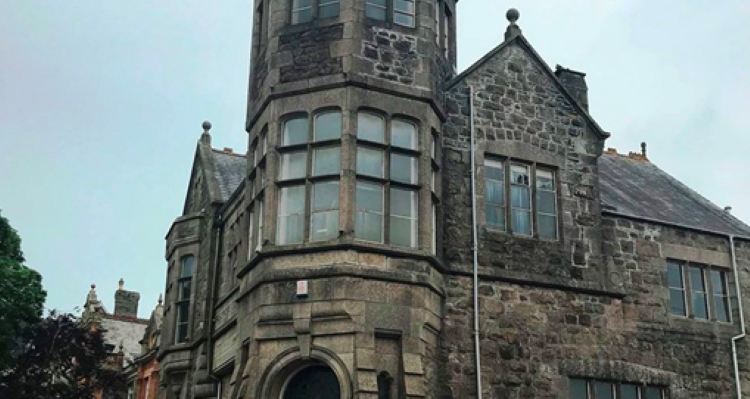 Starting at 2.00pm and culminating in the announcement of the new name for the much-loved building at 4.00pm, the hoardings will be torn down ready to be turned into art pieces. There will be a host of community activities including the installation of an art panel on the building, and performances by local musicians including the Cornish Language Choir.  Food sellers and artists will be on hand to add to the party atmosphere.

A new Redruth Former Library Community Interest Company has plans to breathe new life into the striking historic building after agreeing with Cornwall Council to take on a five-year lease.

The project is part of the Redruth High Street Heritage Action Zone, a partnership between Cornwall Council, Historic England and others to regenerate and improve the prosperity of Redruth town centre for the local community and businesses.

Over the next five years the CIC plan to raise the funds to purchase the property and restore it to its former glory by turning it into an arts, performance and music space for the people of Redruth.

Built by Redruth’s principal 19th century architect, James Hicks, in 1894-5, the building closed to the public in 2022 when the library service moved to Alma Place.

Josh Nawras (RIFT) said: “Redruth Former Library CIC is committed to preserving the former Library, cherished by the people of Redruth, for community use.  We’re a group of Cornish creative charities continuing the legacy of the library, in the words of Passmore Edwards, ‘to advocate great principles, advance useful institutions and elevate man’.”

The project will begin with work to preserve the heritage of the building. Redruth Former Library CIC will be launching a fundraising campaign later in 2022.

Barbara Ellenbroek, Cornwall Councillor for Redruth South said: “The Passmore Edwards building is an iconic and well-loved part of Redruth’s built environment. Residents were very clear that they wanted to see the building retained for community use.  Progress on this fantastic repurposing has inevitably been delayed by the Pandemic, and has caused some anxiety, however we are now at a stage where the new owners will be able to reveal their plans.”

“The event on Murdoch Day will be the culmination of hard work and commitment by a range of partners to ensure that the former Passmore Edwards Library becomes a vibrant community and arts space as well as a new creative and cultural venue for the people of Redruth.   RIFT have a great passion for the building and will bring with them an exciting programme of community events that will be open to everyone along with the creation of much needed local workspace.  I hope that the community will join us to mark a very special day in a new chapter of Passmore Edwards building.”

Rebecca Barrett, Regional Director at Historic England, said: “We’re delighted that the Passmore Edwards Library, which is so important to Redruth’s story, will soon be a space for the community once again. We are proud to support the CIC’s exciting plans through the High Street Heritage Action Zone.”

Martyn Alvey, Cornwall Council portfolio holder for environment, including heritage, and climate change said: “This brilliant initiative supports the Council’s priority to make Cornwall a place where our residents can start well and live well as we work with communities to protect our heritage and make where they live a thriving, sustainable and attractive place for residents.”

A multimillion school expansion project in Launceston reaches a milestone