The Armed Forces Day flag will fly outside County Hall in Dorchester on 20 June to highlight support and respect for the Armed Forces community.  The annual ceremony is an opportunity to honour service men and women, past and present. 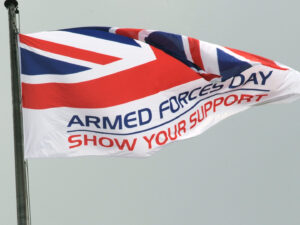 The flag will be raised at a special ceremony at 10 am, hosted by Cllr Val Pothecary, Chairman of Dorset Council.

In attendance will be Mr Angus Campbell, HM Lord-Lieutenant of Dorset; Dr Sibyl Fine King, HM High Sheriff of Dorset; Cllr Val Pothecary, Chairman, Dorset Council; and Cllr Spencer Flower, Leader, Dorset Council. They will be joined by other dignitaries and members of the Armed Forces and Royal Naval Association.

After introductions from the Chairman of Dorset Council, Lt Col James Lance, CO RAC Training Regiment will respond on behalf of the Armed Forces living and working in Dorset. HM Lord-Lieutenant of Dorset will also speak.

The Armed Forces Community, veterans and residents are invited to join the ceremony and mark their respect.

Cllr Pothecary said: “We are privileged to have strong and deep connections with the Armed Forces in Dorset, with serving personnel, veterans and their families making up an important part of our community.

“We want to show our respect and celebrate all that the forces do to defend the nation at home and abroad, from currently serving troops to their families, veterans and cadets.

“We know many towns and villages in Dorset rely on servicemen and women, both economically and socially whilst serving, and when they retire into our communities.

“I am pleased that all local authorities in Dorset signed the Armed Forces Community Covenant in recent years, which promotes integration between service and civilian life.”

For more information about the Armed Forces Covenant, visit the website.

Managing the realities of Global Conflict with our children

Don’t scorch our heathlands in these scorching temperatures

Beryl bikeshare boost for Dorset, just in time for Cycle to Work Day