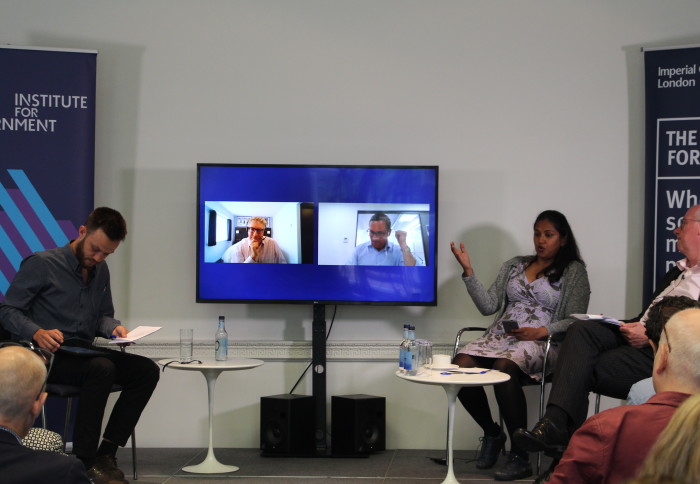 With the UK’s ban on sale of new petrol and diesel cars from 2030, an Imperial Forum event explored the ways to transition to electric vehicles.

The event, hosted jointly by The Forum and the Institute for Government, was the second in a series on different aspects of Net Zero and the role of science and technology in reaching ambitious climate goals. Dr Aruna Sivakumar, Director of the Urban Systems Lab at Imperial College London, spoke alongside Professor David Bailey, Senior Fellow at UK in a Changing Europe, Philip New, Chair of the Electric Vehicle Energy Taskforce, and Jeremy Yapp, Head of Flexible Energy Systems at British Electrotechnical and Allied Manufacturers’ Association (BEAMA).

Heading in the right direction?

Opening panellist’s comments, Dr Sivakumar said that rapid growth of electric vehicle (EV) adoption during the pandemic had continued sustainably into 2022 and that we are now passed the early adopter’s phase. One in four cars sold in the UK this year will be a plug-in hybrid and 40% of UK drivers say their next vehicle will be electric. However, Dr Sivakumar cautioned that barriers to adoption remain, primarily around price and consumer uncertainty around electricity prices. She highlighted that equitability in the transition to EVs would be crucial to ensure adoption isn’t forced on sections of society unable to afford it.

We are on the right trajectory, but barriers remain in place on the demand side, particularly around cost. We need policies to move beyond early adopters. Dr Aruna Sivakumar Director, Urban Systems Lab, Imperial College London

Dr Sivakumar highlighted that policy needs to focus beyond the early adopters and begin targeting information at the other sections of society. Discussing some of her research, she noted that the experience of driving and owning an electric vehicle for a short period helped alleviate consumer concerns from driving through to charging accessibility. Philip New agreed that building accessible, usable, and secure public charging infrastructure would be crucial for equity. He shared modelling by the Energy Systems Catapult predicting £7bn would need to be spent on public infrastructure.

Meanwhile Professor Bailey predicted that by the mid-to-late 2020s, EVs would be able to outperform petrol and diesel vehicles on price. He also explained that China had created an efficient electric EV manufacturing cycle and is likely to become the largest exporters of EV’s globally. He highlighted that this presented a serious challenge to the UK automotive sector.

Several panellists echoed the view that public infrastructure and charging would be vital to drive adoption, alongside existing private take up. They felt that local authorities currently lack the capacity to engage in the planning required for an effective rollout and agreed that they need to be empowered to drive infrastructure changes. Dr Sivakumar explained some previous work with the Royal Borough of Greenwich which included trials of smart lampposts that was intended to provide a template for other local authorities to learn from.

According to industry data, there are currently more than 32,000 public charging points in the UK but at any point one in ten is unusable. Jeremy Yapp from BEAMA stated that one barrier to adoption is the dearth of dynamic time of use tariffs and the need for more flexibility in the energy system for people to charge and get best prices.

Philip New noted that smart charging would be essential for ensuring a smooth transition to EV’s, continuing that smart charging was the only way to ensure integration of vehicles into the energy system. He added that this integration would make it cheaper for the consumer and the system at large. Philip and Professor Bailey also spoke about the importance of interoperability among charging points to ensure a high-quality and easy consumer experience.

Dr Sivakumar underlined that EVs form one part of the puzzle but it is a priority to think about decarbonising transport and mobility more widely. Dr Sivakumar also noted that the ambition should be for public transport usage to exceed pre-pandemic figures considerably, with numbers recovering significantly of late after dropping during the pandemic. She also called for greater infrastructure and encouragement for active travel options to consider transport systems in a joined-up approach.

Looking to the future, Dr Sivakumar spoke to existing research projects on road funding models given decreasing fuel duty income as part of the adoption of EV’s. She explained a current project focused on Birmingham and London exploring two different models for future road user charging, including a zonal scheme comparable to the congestion charge and another based on charge per mile driven.

All panellists agreed that a more flexible energy system with attractive tariff pricing would be essential in driving a smooth and just transition. They also noted the importance of science and technology in making further advances that would level the playing field for adoption and alleviate existing concerns. All spoke optimistically about the potential of battery technology advances to transform adoption and the infrastructure planning and delivery required. To conclude they agreed that owning and charging an electric vehicle should be as easy as using any other basic utility.

The next event, ‘How can the government make its green skills plans deliver for Net Zero?’ will take place on Wednesday 29 June. Details are available on the IfG website.