Each year at graduation, alongside celebrating our talented new alumni, we take the opportunity to honour leading artists in their field and welcome them to the RWCMD Community as Fellows. 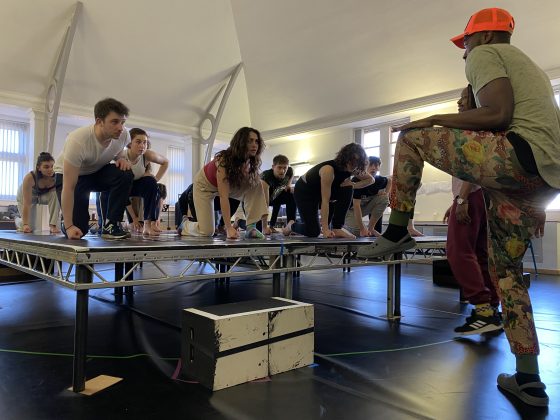 Anthony and Kel Matsena collaborating with acting students in the Old Library on Dream, an adaptation of A Midsummer Night’s Dream

These new Fellows are all at the leading edge of the arts industries in a time of rapid change, and reflect the College’s ongoing commitment to collaboration, excellence and inclusion, artistry, and making a difference to society.

‘Our new Fellows represent some of the most forward-thinking, creative and acclaimed artists in the UK and we warmly welcome them to the College community,’ said Principal Helena Gaunt.

‘They each embody the College’s spirit and ambition to lead through collaboration and innovation alongside deep craft training, nurturing an expert and inclusive community and inspiring the industry change-makers of the future.’

As Chief Executive of the National Youth Orchestra Sarah Alexander OBE has grown the institution from working with 164 young people to one that reaches 10,000 teenagers, opening access to young people from all backgrounds. It is now widely celebrated as the world’s greatest orchestra for teenagers.

Sarah spent many years in Wales leading the education department at WNO and has won prestigious awards from the Association of British Orchestras and the Royal Philharmonic Society among others. The values and direction of the NYO are aligned to those of our new undergraduate music course, and we’re working together to facilitate NYO auditions at the College and to explore the potential to partner on a residency in Cardiff.

Nicola Benedetti CBE is a world-class performer and an outstanding role model as a musician in society making a difference, as well as being one of the most influential contemporary classical artists. She epitomises connections between artistic and social purpose and has been much recognised, with awards including a Grammy in 2020, several classical BRIT awards, the Queen’s Medal for Music, and the RPS Instrumentalist Award in 2021. Nicola has already worked with the College, inspiring young people with her music education projects through the Benedetti Foundation.

In lockdown the College percussion department worked with Nicola on her virtual Benedetti sessions, which reached over 7000 musicians of all ages and stages of expertise around the world. Watch out for them in this amazing video below, coming in at around 33.59!

The feature image shows Nicola working with students in the Dora Stoutzker Hall in 2018.

British lighting designer Paule Constable has won the Laurence Olivier Award for Best Lighting Design, no less than five times, with the most recent being 2020. She was also a nominee for four further productions and for a 2007 Tony Award on Broadway, winning the Tony Award for Best Lighting Design of a play for War Horse in 2011. She has supported the RWCMD production and design departments delivering online masterclasses during the lockdown, inspiring future generations through her work and dedication to the craft.

Gareth Evans is a multi-award-winning Welsh film director, screenwriter, editor, and action choreographer. Wales plays a prominent part in his films and is the main location for most of his shoots, including the upcoming Netflix film Havoc, one of the biggest films ever to be produced in Wales.

📽️Director Gareth Evans’ exciting new project with @SevernScreen for @NetflixUK, HAVOC, is set to be filmed in Wales this summer – with Tom Hardy and Forest Whitaker on board to star https://t.co/tIzs4Y7qHY 🎬 pic.twitter.com/a3asOruYX2

He is passionate about the opportunities for film in Wales and is working with Severn Screen to create a movement for up-and-coming filmmakers in Wales to showcase all it has to offer.

Zimbabwean-born and Welsh-raised Anthony and Kel Matsena have already made a huge impact on the College’s work through their residency and induction project in 2021, and their role as co-directors for DREAM (an adaptation of A Midsummer Night’s Dream). They co-founded Matsena Productions in 2017 as a reaction to the lack of representation they were seeing in schools, on stage and on screen. They have recently been working with BBC Arts and Sadlers Wells on ‘Dancing Nation,’ performing Shades of Blue, their response to the effects of Covid-19 and the Black Lives Matter movement, at the College after its critically-acclaimed premiere in London.

A passionate performer and educator, trombone player Dennis Rollins MBE has established a reputation as an artist of excellence and has lent his unique and stylish talents to some of the world’s top jazz and pop personalities as well as being a renowned bandleader: In 2006 his jazz/funk outfit Badbone & Co won the prestigious BBC Jazz Award for Best Band and the following year he was awarded Trombonist of the Year at both the British Jazz Awards and the Ronnie Scott’s Jazz Awards. In his hometown of Doncaster Dennis was given Honorary Freedom of the Borough in recognition of his successful musical career and for his constant inspiration to the region’s musical youth.
A sought-after jazz educationalist Dennis has recently delivered a wide range of music workshops at the College and works in collaboration with music departments of universities, colleges and schools, both throughout the UK and internationally.