University of Bedfordshire alumni Melvin Odoom and Rickie Haywood-Williams returned to their old stomping ground to broadcast their Radio 1 show live from the Luton campus.

The pair – who met while hosting student radio shows together at the University – brought along co-host Charlie Hedges for a fun-filled week of games, dares and non-stop chat!

Broadcasting from a ‘pop-up’ radio studio based at the Luton campus, their Radio 1 show aired live between 10:30am–12:45pm from Monday to Thursday all week.

Discussing their return to where it all began, Melvin said: “I had the best time at the University – it was my first taste of freedom from my mum’s house! As soon as I came back to the town, I just started smiling straight away. It’s so great to see all our old lecturers who are so proud of us being back on campus.” 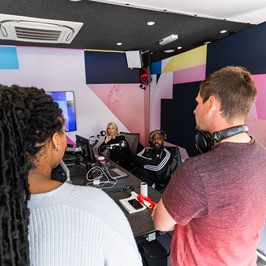 On Monday, the trio unearthed some clips of Melvin and Rickie’s days broadcasting on the University’s student radio station Luton FM – now known as Radio LaB. Later on in the day, they were then joined by current Bedfordshire students, Joe and Priscilla, to chat about university life.

The following day, the presenters headed over to the Students’ Union Metro Bar & Kitchen to take a shift behind the bar, making pizzas and pouring drinks for unsuspecting students and staff.

Rickie, Melvin & Charlie also caught up with graduates Quadri and Megan, who have been taking part in Covid catch-up graduations over the last two weeks, after the pandemic postponed their ceremonies in 2020 and 2021. 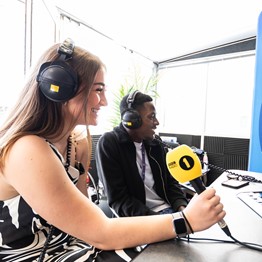 Speaking about the experience, Radio & Audio graduate Megan said: “I looked up to Rickie and Melvin throughout my studies, so to be able to work alongside them today and get the opportunity to talk to them and Charlie live on air was amazing.”

Rickie and Melvin returned to where they got their first taste of radio on Wednesday, with a visit to the Radio LaB studios. While there, they spoke with current students and even appeared on the live broadcast, talking to the station’s student managers, Toby and Nathan. Listen to the show here.

On Thursday, the trio rounded up the week’s antics before heading to Luton Airport to play ‘Charlie’s Fly-Through’, a game with the aim of working out the mystery destinations of travellers.

For more information about studying Radio at the University, visit the School of Arts & Creative Industries.

Clearing 2022: It gave me the opportunity to progress & study a Masters