A local couple has received care for a range of health issues thanks to the Proactive Care team, a Bradford-based NHS service that brings together specialists from all different professions to better support the population of central Bradford.

Stephen and Beryl first met the Proactive Care team (PACT) in November 2021 when Beryl was concerned about her husband’s memory. She had been worried for some time as it was starting to affect his day-to-day life and none of the memory tests he had been given in the past had identified a problem.

Beryl said: “Stephen has always been quiet, so people think he is fine when he’s not. I was relieved when the Proactive Care team gave him the cognitive ability test because it seemed to really identify the part of his brain that was causing the problem. Although it was upsetting, it was important that someone was finally seeing what I could see.”

When people are referred to PACT, they have one overall assessment to find out what their immediate needs are. The team then brings together different healthcare staff to support all these needs at once. This includes physiotherapy, psychological support, speech and language therapy, dietary advice, admiral nurses and occupational therapy. They also bring in other local organisations or support groups as needed.

The Proactive Care team carried out an assessment for both the couple’s general health, as Beryl was also struggling with a bad back. They supported them to install grab handles in useful places such as the bathroom and got Beryl a perching chair for the kitchen.

In addition to receiving dementia support, Stephen was also seen by a physiotherapist from PACT who came to their house to assess him. Beryl described how they not only gave him exercises to do, but took time to see how his muscles were working and to give him a full assessment. 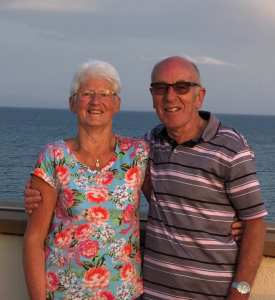 She said: “They listen, give you time and never make you feel rushed. I couldn’t fault any of them.”

Beryl praised how much difference PACT have been able to make to them both because of all the different specialists being in the same team, saying: “We’re more able around the house and if we have a problem, I always know they’ll be phoning soon to provide support or signpost us to the right places. We’re able to get out for the shopping more easily because the team supported our application for a blue badge too.

“I can’t explain what a difference that reassurance has made. We’re lucky that they’ve done all this – I don’t think we could have sorted it all out for ourselves.”

Sue Butters, PACT team leader, said: “The team is delighted to be able to support couples like Stephen and Beryl who come to us with a number of physical and mental health conditions that they need support with. By doing one holistic assessment and by bringing together a team of different professions, we’re able to make a difference to people more quickly by looking at everything as a whole.

“This approach, as part of the Reducing Inequalities in Communities (RIC) project, aims to reduce the health inequalities seen in central  Bradford, where people’s life expectancy is shorter compared to those living in other parts of the District. As a team, we are committed to improving this.”

Max on the fast track to future motor vehicle career