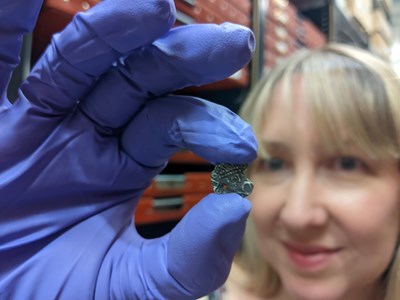 A tiny coin which lay buried beneath the Yorkshire soil for more than 1,300 years has been banked by a Leeds museum.

The ancient treasure is an example of a sceat, among the littlest coins ever made in Britain, and was unearthed by an eagle-eyed detectorist on a patch of local land.

After formally being declared treasure, it has been secured for the collection at Leeds City Museum, where a fascinating exhibition is exploring the remarkable story of money.

Made of silver, the coin dates from around 700 AD and, centuries ago, was pierced by its early Saxon owner, perhaps so it could be threaded and worn around the neck as a pendant.

Measuring less than 12mm in diameter, its intricate design includes a crowned head facing right, and on the reverse a beaded pattern with the letters TOTII, obscured by the pierced hole and some later damage. It may have been worn around the neck as protection or as a spiritual symbol.

Pierced sceattas (the plural for sceats) are uncommon and coins of this type are typically centred on the east and north-east of Kent, suggesting the Leeds example may have been a copy made at the time.

Kat Baxter, Leeds Museums and Galleries’ curator of archaeology and numismatics, said: “Like many of the remarkable coins in our collection, the sceat is a tiny object which has a surprisingly big story to tell.

“More than 1,300 years ago, someone decided they wanted to wear it as a piece of jewellery because it meant something specific and personal to them. Even after so many centuries buried in the ground, just seeing it today gives us a very real and direct connection to that person and reminds us of the history underneath our feet.

“It also helps us to understand more about the concept of value, and how we have assigned it to money and objects over the centuries for both their intrinsic worth and their symbolic meaning. We’re extremely grateful to responsible metal detectorists who uncover such interesting finds, and work with the Portable Antiquities Scheme to record them.”

The sceat acquisition coincided with Money Talks at Leeds City Museum, which explores the evolution of money and how our relationship with it has changed.

More than 30,000 people have already visited the exhibition, which closes this weekend.

Objects on display include ancient coin hoards, unusual examples of money from around the world as well as popular toys and games which have featured money and banking.

One much larger example includes some Swedish plate money, used in the 17th Century, which took the form of printed copper plates equal to the value of the currency it represented. The excessive weight inspired the adoption of a more manageable paper substitute.

Also on display is a plaster model of a shilling from Ireland, dating from before 1928.  The sculptor, Percy Metcalfe, designed the Irish Free State coinage of 1928. Some of his designs featured animals important to Ireland’s economy, such as the bull, hare, salmon and Irish wolfhound.

This exhibition is sponsored by Leeds Building Society which was founded in 1875 by people working together to save and put home ownership within reach generation after generation.

Councillor Jonathan Pryor, Leeds City Council’s executive member for economy, culture and education, said: “Fascinating stories like this one are a powerful reminder of the value of museums, particularly their ability to capture our imaginations and inspire us to think about the connections we share with the people who have lived in Leeds long before us.

“It’s great to see museums and their exhibitions inspiring new additions to the collection which can now be part of telling those stories to future generations.”

Money Talks at Leeds City Museum is free to visit and is open until June 26. For more details, please visit: https://museumsandgalleries.leeds.gov.uk/events/leeds-city-museum/money-talks