From Cardiff to London « #RWCMD

The College’s innovative NEW ’22 season returns in its full glory, with our students performing the premieres in Cardiff before taking the shows to London’s Yard Theatre, for the first time in three years.

This annual new writing festival brings together four brand new plays, commissioned especially for the season, and performed by our own Richard Burton Theatre Company.

We spoke to the directors and writers to find out more about this exciting season:

Not on here much nowadays – but it’s been a great experience bringing @royboywilliams words to life with an amazing group of actors and creatives.

See the next generation of talent right here – in either Cardiff or London https://t.co/B3qBpoZKl8

In director Tom’s words, the play ‘explores and celebrates protest’s role in the fight for racial equality.’ 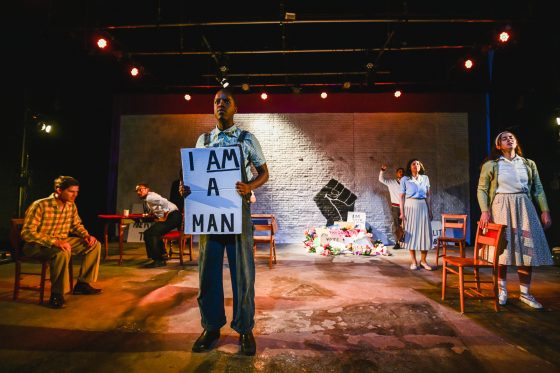 ‘Roy is one of the leading Black voices in the country and a world-leading playwright. We’re honoured to have him with us at the Royal Welsh College,’ said Jonathan Munby, Director of Drama Performance.

Such a surreal night last night watching @royboywilliams’ new play Freedom (March on Selma) with these two Welsh legends at @rwcmd congratulations to all cast and crew you were brilliant! pic.twitter.com/9JSBniNtfj

Writer Charlie Josephine introduces her play in the TikTok below:

Sean Linnen directed Moon Licks and explained how much he enjoys working with our Richard Burton Theatre Company, just as they are getting ready to graduate and enter the industry.

‘It feels so exciting to work with them while they’re on the precipice of this huge thing, entering into a career as artists and stage managers and designers.’

The design students’ challenge when working on NEW is to create sets that are not only simple enough to travel and set up quickly, but can also work for two of the season’s shows. Below is a timelapse of the set for Moon Licks transforming into the set for Freedom (March on Selma.)

After a hugely successful premiere of shows at the college, the #RichardBurtonCompany are now on the road and taking #New22, our festival of new writing to @YardTheatre in London!

Check out the stage managers doing their turnaround from Moon Licks to Freedom (March on Selma)! pic.twitter.com/U4aECSeP0q

Director Matthew Holmquist described Jungle Green as a play that ‘touches on a human part of living, knowing that you need to grow up and leave things behind, but that that’s not necessarily being a bad thing.’ 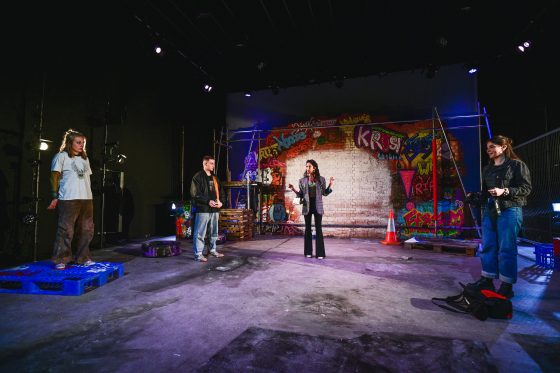 I can’t believe it’s our last day in Cardiff! To be @ShermanTheatre again with a proper play has been a dream come true. Thank you to everyone who came to see it. I hope you enjoyed the work @MDHolmquist produced with this incredible year of @RWCMD students as much as I did. https://t.co/RTH171RdGl

Louise Orwin, writer of RWCMD commissioned REALLY BAD, described it as ‘kind of a take on coming of age movies. It looks at what it feels like to be living through the apocalypse. It also looks a bit at celebrity culture and what it’s like to grow up in such a media-tired society.’

@louiseorwin presents a fever dream of what it’s like to come of age in the apocalypse. How bad can it really get?

Really Bad is on stage as part of #NEW22, @RWCMD‘s New Writing Festival, until Thursday 2 June.

Louise said that her approach to creating the play was to ‘get it up on its feet as soon as possible. I really love discovering what the heart of the play is with the performers in the space, and having that co-creator, collaborative process. It’s been such a joy to work with these students.’

We caught up with @louiseorwin, the writer and director of REALLY BAD, to find out about what motivates her as a playwright, and to hear about the inspiration behind her new show.

Check out what’s in store…👀