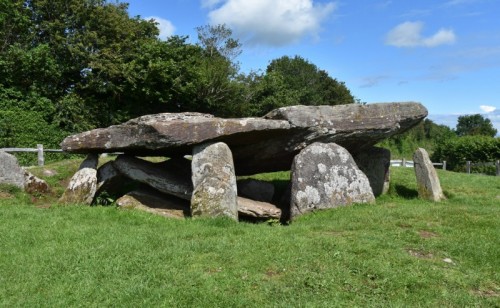 Archaeologists from The University of Manchester have started a dig at a 5,000-year-old tomb linked to King Arthur, hoping to answer some of the mysteries surrounding the enigmatic site in the process.

The experts are working in partnership with English Heritage, which looks after Arthur’s Stone in Herefordshire, to remove turf to expose and record particularly sensitive archaeological remains.

Arthur’s Stone is a Neolithic chambered tomb which has never previously been excavated, but English Heritage say that similar examples in the same region have been found to contain incomplete skeletal remains of several people, together with flint flakes, arrowheads and pottery.

Today, only the large stones of the inner chamber remains, which is placed in a mound of earth and stones whose original size and shape remains a mystery. The chamber is formed of nine upright stones, with an enormous capstone estimated to weigh more than 25 tonnes on top.

Like many prehistoric monuments in western England and Wales, this tomb has been linked to King Arthur since before the 13th century. According to legend, it was here that Arthur slew a giant who left the impression of his elbows on one of the stones as he fell.

More recently, the author CS Lewis is thought to have been inspired by the area when creating his fictional world of Narnia – with Arthur’s Stone the inspiration for the stone table upon which Aslan the Lion is sacrificed in The Lion, The Witch, and The Wardrobe.

“Arthur’s Stone is one of the country’s most significant Stone Age monuments, and this excavation gives a really rare and exciting chance for members of the public to come and see archaeology in action,” said Ginny Slade, Volunteer Manager at English Heritage. “Our team of wonderful volunteers will be on hand to explain the latest findings as they happen – we’re asking people to book in advance to make sure everyone has a chance to enjoy this great opportunity.”

The dig follows research undertaken by the Universities of Manchester and Cardiff immediately to the south of the monument last year which has already changed the thinking about the orientation and origins of the site.

It was assumed that Arthur’s Stone stood within a wedge-shaped stone cairn, similar to those found in the Cotswolds and South Wales, but Manchester’s Professor Julian Thomas and Cardiff’s Professor Keith Ray found that the monument originally extended into a field to the southwest, and may have taken the form of a low turf mound with rounded ends. Professors Thomas and Professor Ray will also lead the upcoming excavations, with the participation of students from Cardiff University and a series of American institutions.

One family, two generations of nurses, four decades of dedication at MFT

Diabetes drugs could save thousands of lives

Nazir Afzal is The University of Manchester’s new Chancellor