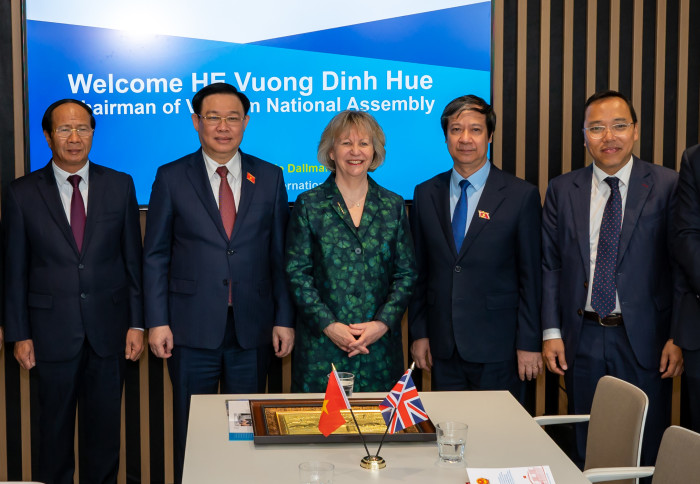 The Chairman of Vietnam’s National Assembly Vuong Dinh Hue joined delegates from Imperial, university leaders from the UK and Vietnam, and policymakers at an event to strengthen education ties between the two countries.

Chairman Vuong Dinh Hue said: “I hold in very high regard the history and achievements of Imperial College London. I am also very impressed that your research staff and alumni have contributed 14 Nobel Laureates to the world. Cooperation in education, training and technology is one of the key pillars in the partnership between Vietnam and the UK, so the event today is deeply significant. International cooperation is important to improving Vietnam’s education.”

Imperial’s Vice President (International) Maggie Dallman welcomed the delegation to the Sir Michael Uren Hub which was hosting the event. Professor Dallman said: “Collaborating with people with different backgrounds, nationalities and cultures is what drives the best universities. At Imperial international collaboration is absolutely central to everything that we do.

“In the past decade alone we have collaborated with peers in 192 countries and over 56% of our research output involves international partners. We are working to build research collaborations with colleagues and partners in Vietnam and are looking to grow the number of Vietnamese students who come to the UK and Imperial.”

Professor Dallman, accompanied by Dr Minh-Son Pham, from the Department of Materials, highlighted some of the scientific collaborations between Imperial academics and partners in Vietnam such as the Future Vaccine Manufacturing Hub which partners with VaBiotech in Hanoi to work on yeast platforms and eliminating the cold chain. The Global Health and Development Group has worked with policy makers in Vietnam and piloted a local quality improvement initiative with hospital staff in Vietnam to reduce inappropriate antibiotic prescribing for pneumonia.

The Forum event, organised with the British Council, also brought many leaders from Vietnamese and UK universities, academics, students and policymakers.

Nigel Evans, Deputy Speaker of the House of Commons, said: “Education is one of the top priorities in cooperation between Vietnam and the UK and it’s reflected in the number of Vietnamese students being educated in the UK, with more than 12,000. They come to the UK for its political stability, lifestyle and image of institutions, the quality of courses, cost and ability to succeed, and job prospects.”

Vivienne Stern, Director of Universities UK International, said: “The UK government has identified Vietnam as a partner with whom we hope to develop a deeper relationship and transnational education is central to that vision. UK universities have developed new relationships with Vietnamese counterparts in areas such as food security to infectious disease and smart urbanisation.”