The Chief Executive of Doncaster and Bassetlaw Teaching Hospitals (DBTH), Richard Parker OBE was joined by representatives from the Doncaster Cancer Detection Trust (DCDT) and Dame Rosie Winterton, MP for Doncaster Central, to officially cut the ribbon on the service at long last.

Building works initially began in February 2019, following an investment of more than £4.9 million from the Department of Health and Social Care. This money was awarded thanks to a bid put forward by the South Yorkshire and Bassetlaw Integrated Care Board (of which DBTH is a key member), to build the brand new facility DRI, and the project was completed in March 2020. 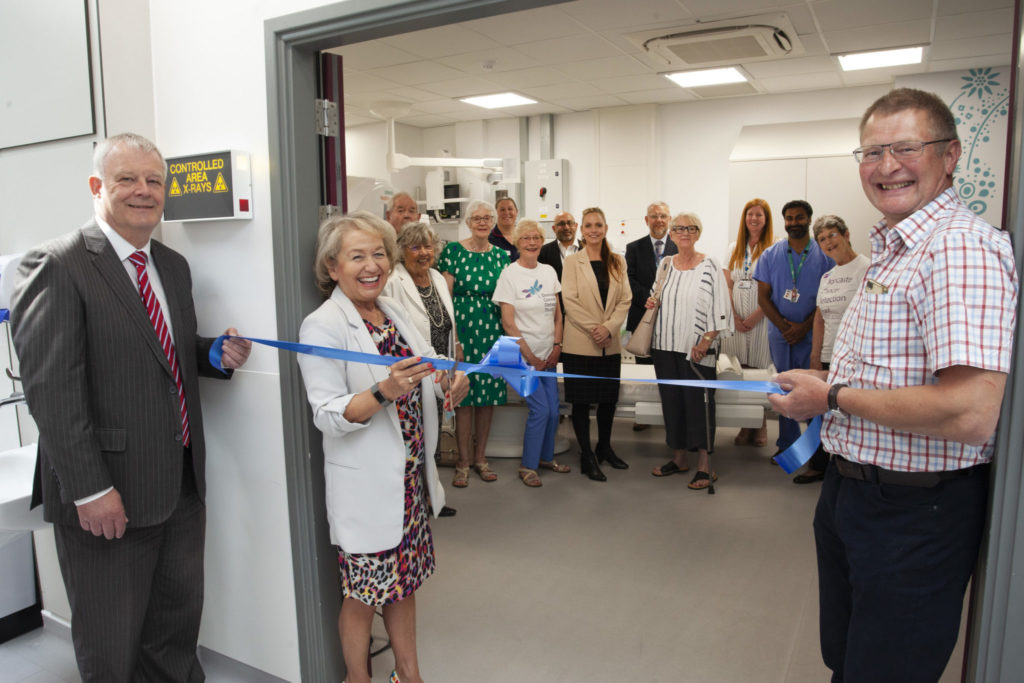 Integral to the scheme was the support of the DCDT, a local charity which has supported DBTH since the early 1970s, raising more than £10 million to aid in the care and treatment of local people. In all, and with support from communities in Doncaster, the team managed to raise around £500,000 to purchase a new CT scanner, which enabled the development of the new suite with the aid of additional funding from the Government.

To honour these efforts, and particularly the memory of the one of the charity’s co-founders, the facility has been named the Jeannette Fish MBE CT Imaging Suite, with a suitable plaque to be placed at the entry of the service, and all signage soon to be updated to reflect this change.

A former nurse, Jeannette was a co-founder of the DCDT, and sadly passed away in May 2018. Amongst her many achievements, including the procurement of an MRI scanner at DRI, Jeannette helped to raise millions of pounds for cancer diagnosis, care and treatment, aiding in the purchasing of equipment which helped to bring cancer services to Doncaster, hugely benefitting local patients. For these efforts, she was awarded a Most Excellent Order of the British Empire (MBE) in 2012. 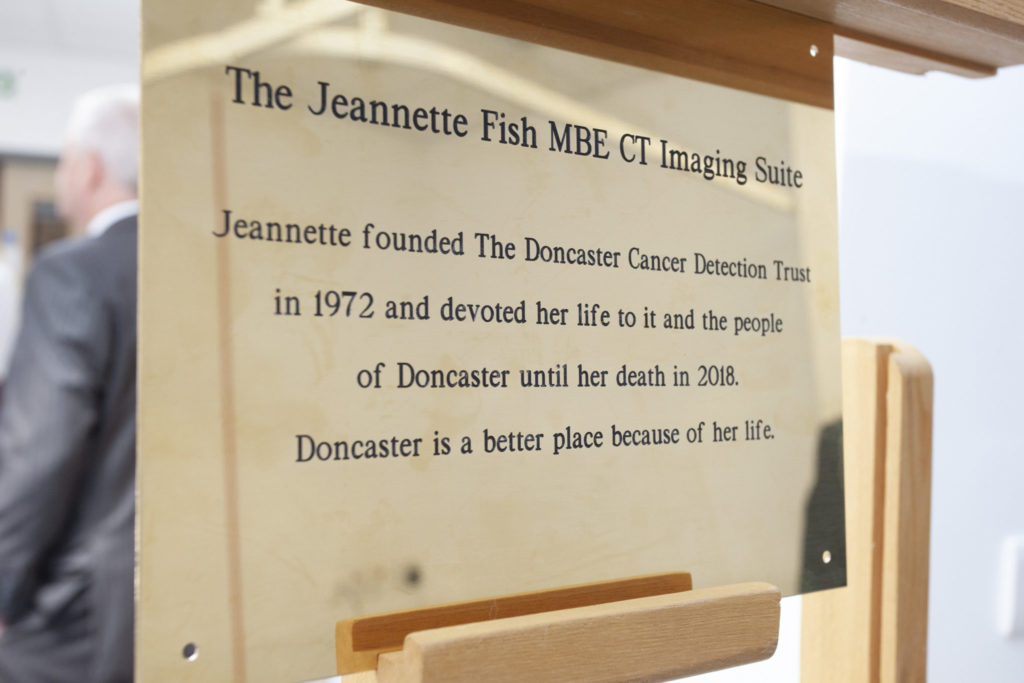 Richard Parker OBE, Chief Executive at Doncaster and Bassetlaw Teaching Hospitals, said: “I was delighted to be joined by our friends at the Doncaster Cancer Detection Trust, as well as Dame Rosie Winterton, to finally, and at long last, open the Jeannette Fish CT Suite. As a Trust, we owe a debt of gratitude to our patrons at the DCDT. Their support throughout the past 40 years has been unwavering and together they have helped to improve, and in many cases prolong, the life of so many local people.

“Sadly, we could not be joined today by Jeannette Fish, an extraordinary lady who worked tirelessly to improve cancer care throughout her extraordinary life. As the plaque reads upon entry to the suite, Jeannette devoted her life to the people of Doncaster, and the town (now a city) is a better place because of her life. We will be eternally grateful, and we can think of no better tribute than to honour Jeannette in this way, and ensure that people remember her efforts for generations to come.”

Although the Jeannette Fish CT Suite officially opened on Friday 24 June, it became operational in March 2020, and since that time has increased the Trust’s scanning capacity by around 50% – a particularly timely improvement as the organisation seeks to catch up on the backlog created as a result of the COVID-19 pandemic. 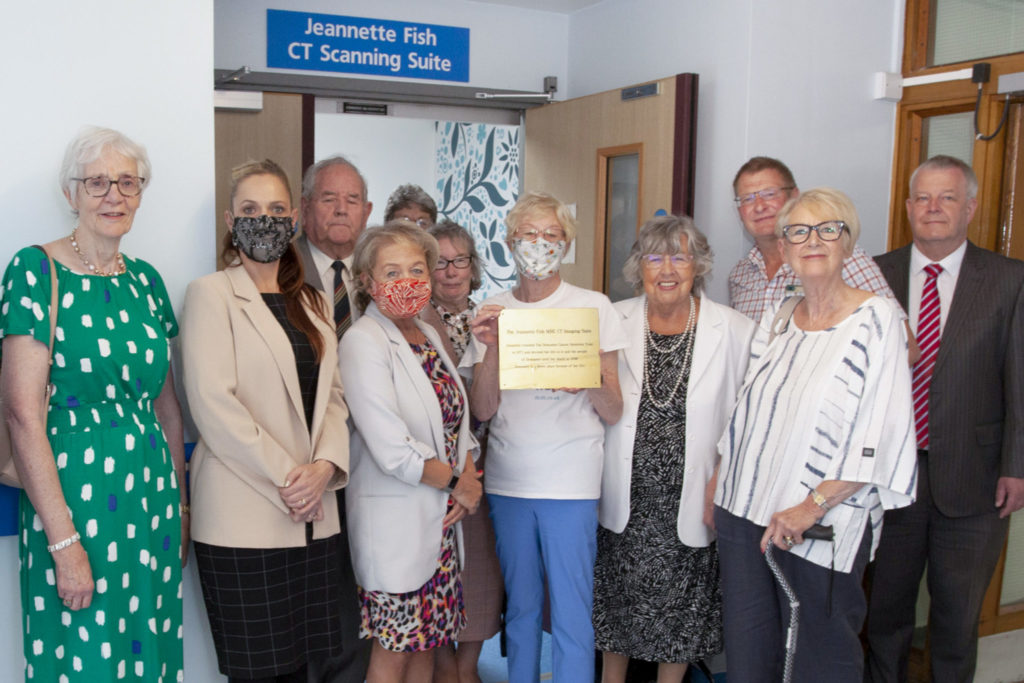 The Venerable Bob Fitzharris, recently retired Chair of DCDT, said: “Doncaster is a poorer place since the death of Jeanette Fish MBE but a richer place thanks to Jeanette’s half a century of devoted service in leading the work of Doncaster Cancer Detection Trust It is a fitting tribute to such a dedicated lady that her name will live on in the Jeanette Fish CT imaging Suite.

Increasing CT capacity with this investment and development at Doncaster Royal Infirmary is also key to fulfilling the Trust’s Hyper Acute Stroke Unit (HASU) commitments. Work which took place across all partners within the South Yorkshire and Bassetlaw Integrated Care System (ICS) in 2018 concluded that the number of HASU in the region should reduce from five to three, with DBTH maintaining and expanding its service. This change, now in effect, means that the number of stroke patients seen within Doncaster has increased, and as such CT capacity is paramount in ensuring patients receive effective thrombolysis treatment.

Dame Rosie Winterton, MP for Doncaster Central, said: “‘As Patron of Doncaster Cancer Detection Trust, it was an honour to attend the opening of this wonderful facility, as well as honour the life of Jeannette Fish who did so much for Doncaster. The benefit the new CT suite and scanner will have for patients is tremendous and this will go a long way in diagnosing cancer, as well as its use in urgent and emergency patients.”

You can find out more about the Doncaster Detection Trust, as well as their fundraising projects and how you can get involved, by heading to: https://dcdt.co.uk/