Hospitals use hundreds of sharps boxes a year, but a scheme has been set up to recycle them to save plastic, money and reduce carbon emissions.

Sharps boxes are used to dispose of needles, syringes, empty vials, razors and finger-pricking devices. Disposing of them safely is vital, and the usual method is for the entire box and its contents to be incinerated. But an eco-friendly scheme means the contents are being safely removed and incinerated before the box is then cleaned, sanitised and returned to the hospital to be used again. 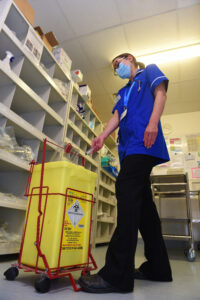 Liz Warren, deputy sister, at Colchester Hospital disposing of a needle into one of the 30-litre sharps box being reused

So far the scheme has reused more than 70,000 containers from being incinerated which equates to nearly 400,000kgs of carbon and more than 130,000kgs of plastic being saved.

Scott Yearling, portering and waste manager at ESNEFT, said: “This is a great initiative, with each sharps bin being able to be reused up to 600 times instead of just once.

“We’re using a company called Stericycle and they’ve estimated that reusing one tub 600 times is the equivalent to running two small cars for a year. So as an estimate since we launched the scheme we’ve saved the equivalent carbon emission of around 100 cars running for a year!”

The scheme is part of several ways ESNEFT is aiming to be greener by reduce carbon emissions and become ‘net zero’.

Scott added: “We’re working on a variety of ways to reduce our carbon footprint and how much waste we create as a Trust. Knowing just by reusing the bins has already saved 400,000kgs of carbon is a great step forward in reducing our environmental footprint. Not only does this reduce our plastic waste, but it’s also saving money as we don’t have to buy as many sharps bins as before.” 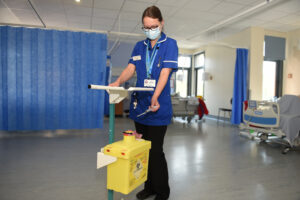 There are variety of different sharps bins used in the hospital, with the scheme reusing the 7.5 litre and 30.2 litre bins.

The scheme is currently running at Colchester Hospital with plans to roll it out at Ipswich Hospital when possible.

Offering a helping hand into a new NHS career

“The ESNEFT team have been absolutely faultless”