Eden District Council’s Deputy Leader and Portfolio Holder for Economies and Enterprise, Cllr Mary Robinson, and Interim Chief Executive, Ian Frost, were in attendance at this year’s Cumbria Tourism Awards evening on Wednesday 6 July, as the Council sponsored the Taste of Cumbria award. 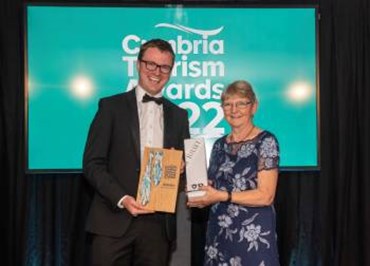 The Cottage in the Wood fought off tough competition to take home the Taste of Cumbria award, which celebrates exceptional food service businesses within the tourism industry, including restaurants, cafes, tearooms, coffee shops and bistros.

Cllr Robinson said: “We were delighted to support the Cumbria Tourism awards this year by sponsoring the Taste of Cumbria Award. Food is a vital element of the tourism offer and we are very lucky in Eden to have such a fantastic range of places to eat and drink plus some wonderful suppliers of locally sourced produce.

“We have recently launched our Inspiring Eden Economic Prospectus which aims to support local businesses and drive economic prosperity in the area – of which the visitor economy plays a vital role.”

Support for Eden Agribusinesses as Council partners with Farmer Network