An undergraduate student from the University of Bedfordshire has landed a year-long internship with The Walt Disney Company, working across the company’s vast video game portfolio.

Jamie Arnold, a Computer Games Development student, has recently finished his second year of study and will return to complete his third and final year after this one-year placement with the entertainment giant.

Based at their London office, Jamie will be working with Disney on producing and marketing video games for Disney and their licence holders.

Jamie said: “I’m doing great so far at Disney – the team is very happy with my performance and everyone is so helpful when it comes to teaching me about my new role.

“Working here is amazing, from the viewing of new films in their in-house cinema, to the fact that I have my own desk surrounded by other interns, it all makes the work place wonderful to work in.” 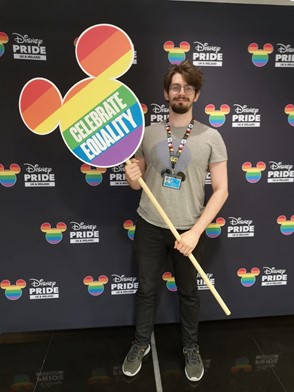 He continued: “When I was told that I got the internship I had no idea how to react – I mean, it’s Disney after all! I never expected when I first saw the advert that I would be the intern they chose! The University of Bedfordshire definitely prepared me for not only acting in the role, but for securing the role as well.”

Disney have offices in more than six different locations around the globe and Jamie’s work style will be hybrid, meaning he will be spending half of his time working in the office and the other half working from home.

Dr Marcia Gibson, Senior Lecturer in Computer Science and Technology within the University’s Faculty of Creative Arts, Technologies & Science (CATS), spoke about how the University helped to prepare Jamie for this competitive opportunity.

She said: “I’m really made up and just so proud of Jamie for securing the internship at Disney. He underwent an extremely competitive selection process and I’m glad that all of his hard work at his studies and personal projects have paid off; combined with the support which myself and the careers team have provided.

“I am sure this internship will impart a really invaluable experience that will kick-start his career in games development. He’ll be missed in classes this year by the teaching team, but we look forward to him re-joining the course for his third year in 2023 and wish him all the very best of luck in his internship role.”