A Gold Award has been given to Dorset Council as part of the Ministry of Defence Employer Recognition Scheme. 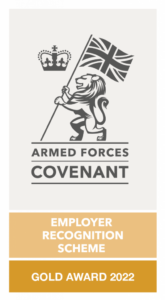 Representing the highest badge of honour, the MoD bestows the Gold Award to businesses and organisations which go the extra mile to demonstrate their commitment to aiding and employing members of the military community.

The council is the first public sector organisation in Dorset to achieve the Gold Award and one of only six Gold ERS award holders in the county.

The council previously held a silver award, bestowed in 2021.  To achieve the Gold Award, the council has developed a number of initiatives to encourage and support employees who are veterans, reservists, and cadet force adult volunteers, as well as spouses and partners of those serving in the Armed Forces.

Achieving the Gold Award is part of Dorset Council’s pledge through the Armed Forces Covenant to ensure those who serve, or have served, in the Armed Forces, and their families, are treated with fairness and respect in their communities, economy and society.

The council signed up to the Armed Forces Covenant in 2019 with BCP Council and partners, including the NHS and Dorset Police.

Cllr David Walsh, Armed Forces Champion for Dorset Council, said: “We are delighted to receive the MOD’s Employer Recognition Scheme Gold Award. This demonstrates our support for over 80 Armed Forces colleagues including Reservists, Veterans and their families, and Cadet Force Adult Volunteers.

“Dorset has a strong association with the Armed Forces, and we recognise the skills, knowledge and experience they bring to the council as well as the service they have given to our country.

“I am proud of our commitment to our Armed Forces community, and we will continue to work hard with our partners to progress and develop our work to support them.”

Matt Prosser – Dorset Council Chief Executive, said: “To be recognised for the progress we have made is great news – we know that our policies and enhanced opportunities are making a big difference to the lives of our armed forces community.

“The achievement highlights the work that has been ongoing to develop the council as a Forces friendly employer.

“I want to thank all those involved for their hard work and commitment to our Armed Forces community.”

Dorset Council has a range of policies that support the former Armed Forces personnel and the Reservists it employs. These include:

There will be an official ceremony on 24 November at Britannia Royal Navy College, Dartmouth, the Navy’s version of Sandhurst.

Town centre to be left clear for Jubilee celebrations

How well are we addressing the Climate and Ecological Emergency?