An orthopaedic surgeon at East Suffolk and North Essex NHS Foundation Trust (ESNEFT) has been elected to take on a highly prestigious national role to improve patient care and uphold professional standards in the world of specialist musculoskeletal surgery.

Consultant orthopaedic surgeon Mark Bowditch has been named vice president-elect by the British Orthopaedic Association (BOA) and will take on the presidency in 2024. The position represents all areas of musculoskeletal care – from hands, shoulders, and spine, to hips, knees, feet, trauma, and children.

He will be the second consultant from Ipswich Hospital to take on the role following Dame Clare Marx’s appointment in 2009. 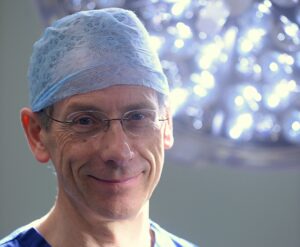 Dame Clare has long been one of Mr Bowditch’s mentors and, fittingly, was one of the people who nominated him to head the profession and follow in her BOA footsteps.

Mr Bowditch, a leading knee surgeon who is also divisional director for musculoskeletal and special surgery at ESNEFT, has been a consultant for 22 years, but first arrived at Ipswich Hospital as a registrar some 26 years ago. He is also the Head of Surgical training in the East of England and was previously the head of orthopaedic training in the UK.

He said: “It’s an honour to be asked by my peers to lead the association, and I’m delighted and humbled to have been elected to this national role.

“The scale and importance of the role, representing both the profession and the patients we serve, excites me and it’s an extremely important time with so many people waiting for treatment and living with pain and disability.

“I’m really looking forward to representing and supporting my fellow trauma and orthopaedic surgeons to deliver high standards of care.”

Mr Bowditch takes up the role as vice president elect this September, before becoming president next year. This should coincide with the opening of ESNEFT’s multi-million-pound Dame Clare Marx Building, which will be one of the biggest elective orthopaedic centres in Europe.

He added: “The opening of our specialist centre of excellence will put ESNEFT on the regional and national orthopaedic map, boosting our appeal to the workforce of the future and providing increased capacity, which is sorely needed, to improve the lives of local people who need operations like hip and knee replacements.

“Not only will our staff have a fantastic facility to work in, but the rest of the country will also be looking to see what ESNEFT does, along with the other big names, to provide better care for the community.”

What is the BOA?

The British Orthopaedic Association (BOA) is the surgical specialty association for trauma and orthopaedics in the UK.

It was established in 1918 with 12 founding members. It now has more than 5,000 members worldwide, with the majority based in the UK and Ireland.

It is both a charity and membership organisation, endeavouring to: